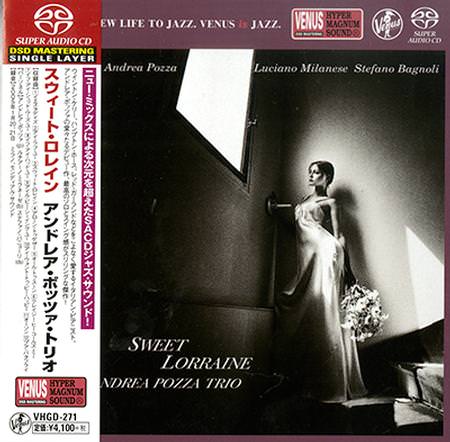 Italian pianist Andrea Pozza admires Wynton Kelly, Hampton Hawes and Red Garland, and his straight-ahead style reflects their influences as well as his own touches of lyricism and sophisticated harmonies. The Japanese label Venus Records is known for finding talent early, and this 2005 recording and his debut CD for the label (reissued here as a deluxe gate-fold paper sleeve edition) is a great example, as Pozza had recorded only one previous album as a leader before this one. Playing a collection of well-known standards, this album served as a perfect introduction of his piano style to the Japanese audience who since then has come to regard Pozza as one of the top Italian jazz pianists. A strong and thrilling piano trio album.

Andrea Pozza is one of the most promising jazz pianists of his generation to emerge on the European scene. On these sessions, he is accompanied by bassist Luciano Milanese and drummer Stefano Bagnoli, both of whom are first-call players for Italian record dates. Producer Tetsuo Hara has a strong preference for a heavy dose of standards, and Pozza doesn’t disappoint, starting with a tense yet swinging take of “Yesterdays.” “Sweet Lorraine” is inevitably compared to landmark versions by Nat King Cole or Art Tatum; Pozza’s lyrical arrangement doesn’t have a vocal nor fireworks at the keyboard, it is just a solid, swinging effort that gradually gathers steam, with a strong solo by Milanese as well. The pianist also has a gift for ballads, opening Duke Ellington’s bittersweet “All Too Soon” unaccompanied while utilizing the sustain pedal extensively until his sidemen join him. He omits the verse to “Poor Butterfly,” opting to pick up the tempo a bit more than most interpreters. There is one relative obscurity present: Billy Strayhorn’s gorgeous ballad “Orson,” a dreamy solo feature for Pozza. Recommended.