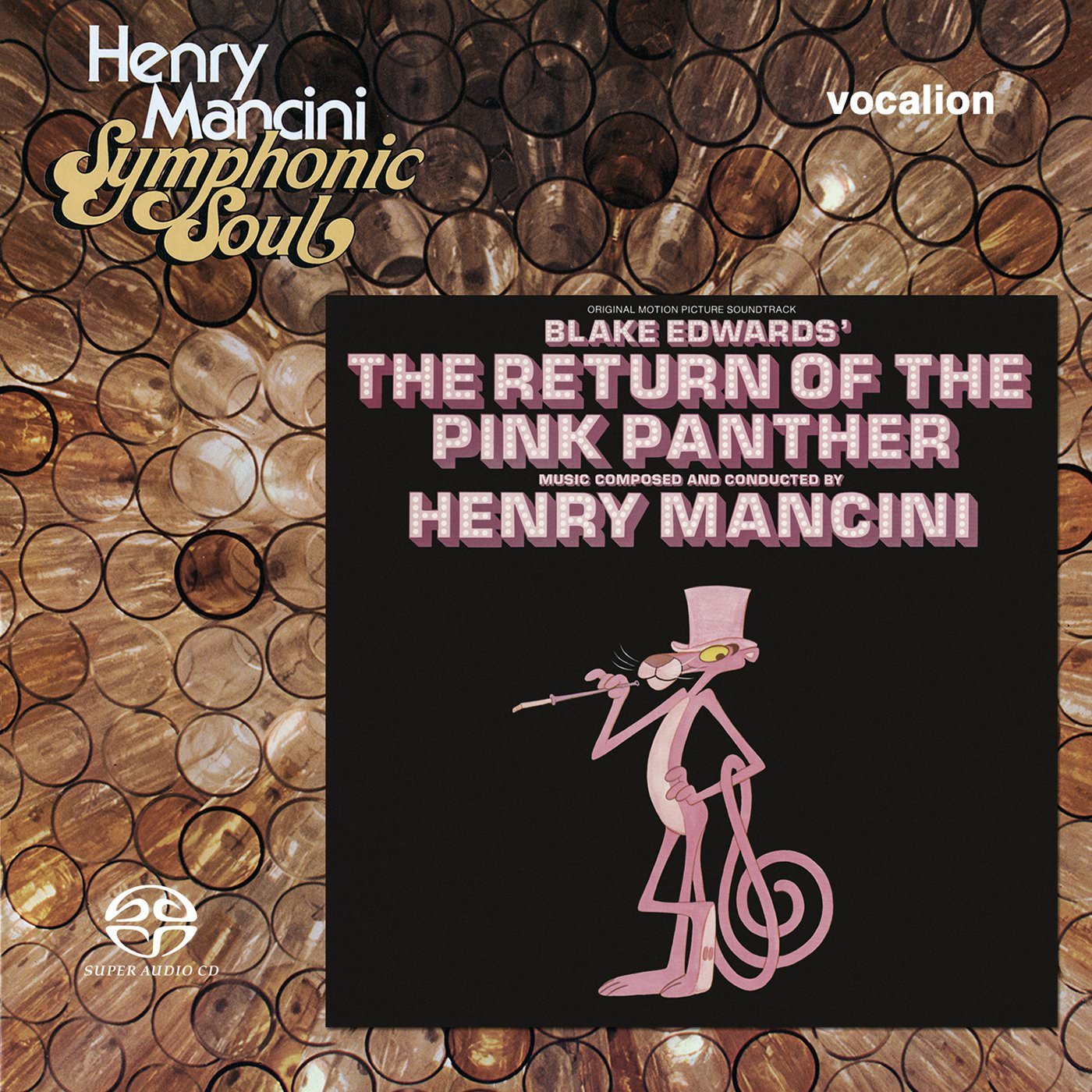 Two cool Henry Mancini album – one soundtrack, and one sweet set of instrumentals! Return Of The Pink Panther is a surprisingly groovy record – and one that’s very different from the original Pink Panther soundtrack. Symphonic Soul is one of Henry Mancini’s grooviest LPs from the 70s – a mixture of tight large arrangements with a smooth funky edge, similar to some of his best soundtrack work at the time. The rhythm section is great – with Harvey Mason on drums and Joe Sample on keyboards, and guitar by David T Walker and Dennis Budimir – and the album also features some cool solos on instruments like African finger piano and piccolo trumpet.

Vocalion have returned to familiar territory with their release of Henry Mancini’s twofer CD The Return of the Pink Panther / Symphonic Soul (CDSML 8535). Released in 1975, both albums were also launched in Stereo and Quadrophonic versions. So it’s nice to see Vocalion’s CD make a welcome debut on the hybrid SACD format. As far as Mancini pairings go, this selection works extremely well. The choice of Return of the Pink Panther is undoubtedly a smart move as it is arguably the best of the Panther soundtracks. Recorded at London’s CTS studios, there’s a nice range of styles spread across this memorable score. Released on the cusp of the disco era, there’s naturally a great deal of funky guitar riffs (provided by session musician Alan Parker) as well as some beautiful pieces such as ‘Dreamy’ which saw Mancini himself take to the piano. The highlight piece is arguably The Return of the Pink Panther (parts 1 & 2) which accompanied the theft of the Pink Panther diamond. It’s a great piece of composition which incorporates both the Pink Panther theme, a slow (but increasing dramatic) tension builder and a full on frenzy of brass and strings for its climax.

Supporting Mancini’s soundtrack release is his studio album, Symphonic Soul. The album was recorded in L.A. and manages to merge the funky mid 70s sound with Mancini’s lush orchestrations. Mancini brought a few of his own new compositions to the album including the wonderful title track. He also took this opportunity to introduce a new souped-up version of his memorable Peter Gunn theme. There’s also some well-established period pieces to be found among the track listing including a great variation of The Average White Band’s funk anthem ‘Pick up the pieces’ and Herbie Hancock’s ‘Butterfly’.

Vocalion’s mastering by Michael J. Dutton (from the original master tapes) is reflective of the label’s usual high standards whilst a detailed 8 page booklet rounds off the packaging perfectly.