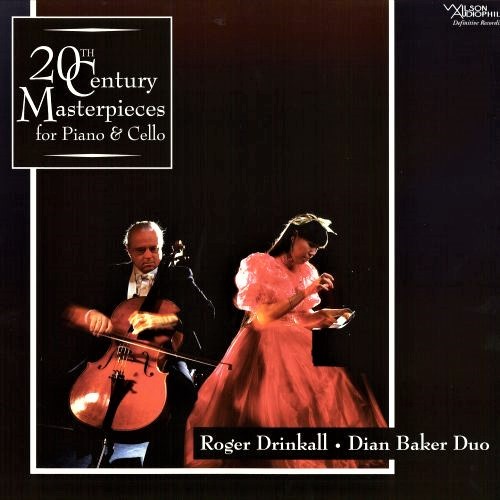 Ginastera (1916-1983) began private music lessons at age seven, and at the age of twelve attended the Williams Conservatory of Buenos Aires. In 1936 he entered the National Conservatory of Music, graduating two years later with highest honors in composition and a professor’s diploma. Ginastera composed a number of large works during his years at the Conservatory, which he later destroyed. His first acknowledged compositions were the Danzas Argentinas for piano, and the ballet Panambi, based on a legend of the Guarany Indians of Northern Argentina, both composed in 1937. These first works reflect the nationalistic character of much of Ginastera’s ouevre.

In 1947, Ginastera composed the first of a group of three pieces under the generic title Pampeana. Pampeana No. l, a Rhapsody for violin and piano (1947), Pampeana No. 2, a Rhapsody for cello and piano (1950), and Pampeana Nn. 3, “Symphonic Pastoral in three movements” (1953) were all written to convey Ginastera’s love for the pampa (Argentine countryside). In Pampeana No. 2, one can hear the immensity of the pampa in the dark, dense chordal sections, and the wild, lawless life of the gauchos (cowboys) in the dashing virtuosity of the cello cadenzas. These sections are juxtaposed with the mysterious and somber tranquility of the slow sections. The cello is used soloistically in the Pampeana, while the piano serves a percussively rhythmic and somewhat accompanimental role throughout.

Debussy’s Sonata in D for Cello and Piano (1915) was one of the last pieces he wrote before his death from cancer in 1918. As Debussy was fighting for his life, the rest of Paris was under siege by the Germans in World War I. Early in 1915, after a year of latency due in part to the atrocities of war, Debussy again began to compose:

“I have come to the conclusion that, all things considered, it would be cowardice on my part to join the ranks of the disabled, and spend my time dwelling on the atrocities that have been committed, without reacting against them by creating, to the best of my ability, at little of that beauty which the enemy is attacking with such fury.” (Claude Debussy, in a letter to Robert Godet, cited in Claude Debussy; His Life and Works, 1933, Leon Vallas, page 255.)

This recording took place in December 1992 at Maurice Abravanel Hall in Salt Lake City, Utah. The hall is noted for its clean acoustics, linear reverberation, and mid-range focus. As in most other Wilson Audio chamber and solo piano recordings, the perspective is close . . . as though the instruments are performing in your listening room.The piano is a nine-foot Falcone – an instrument of unusual beauty in its harmonic richness as well as its left hand power. A spaced pair of omni-directional Schoeps microphones were used. This configuration yields a superbly accurate presentation of harmonics, timbres, and dynamics. The cello is an example of the Italian Luthier Pressenda, crafted in 1830, in Tyrino. The cello bows are the work of William Salchow of New York. When listening to this recording, the cello is positioned in front of the piano. The cello is to the right of center, facing diagonally across the soundstage. The image of the cello is rather large, and moves in the soundstagc as the cellist plays the instrument. This is a normal consequencc of the spaced omni configuration, as is the recordings naturally rich harmonic structure. The microphone preamps, designed and built by John Curl, are sophisticated, fully class A, direct-coupled units.

The master tape was recorded on the UltramasterTM, Wilson Audio’s exclusive 3O ips analog recorder. This instrument, designed and built by John Curl, is fully direct-coupled, and exhibits a record/playback frequency bandwidth of over 45 KHz. 3M 996 mastering tape was used. Location monitoring was on Wilson WATT III/Puppy II precision loudspeakers powered by a Sectral DMA-80 amplifier. At Wilson Audio, master tapes, and reference laquers were evaluated on both the WATT/Puppy and on the WAMM series VII, powered by a variety of amplifiers including Mark Levinson, Audio Research, Krell, Spectral, Jadis, Rowland and Audio Note. Excellent compatibility was realized with all of these designs.This recording was made and mastered using the multi-patented CVT (Constant Velocity Transmission) technologies provided under license to Wilson Audio Specialties by MIT. The use of these technologies preserves details in the recording and mastering process that result in a record or CD with increased clarity and transparency. This ensures a more natural and lifelike representation of the original event. CVT and MIT are registered trademarks of Music Interface Technologies of Auburn, California. Both analog and digital mastering were performed at Wilson Audio’s mastering facilities in Provo, Utah.