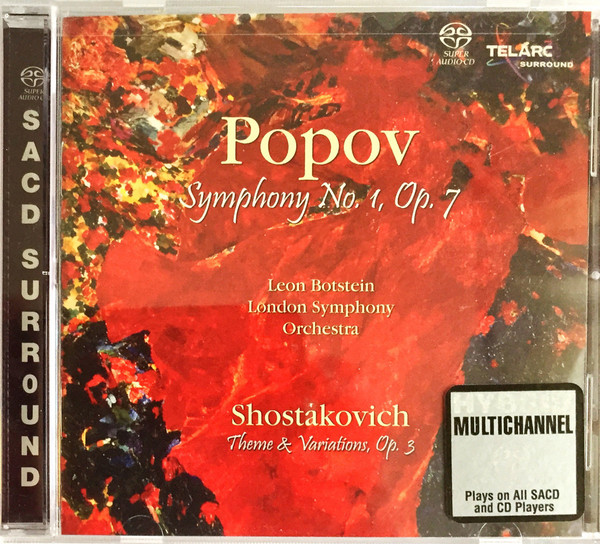 Dmitry Shostakovich had a kind of protean musical genius that could take the shape of any container it was poured into. But what would have happened if his genius had been less adaptable? He might have ended up like Gavriil Popov: virtually unknown 100 years after his birth and 32 years since his death. These two composers had remarkably similar backgrounds. Both were daring young stars ascending in the Soviet firmament until the state intervened and censured them in the 1930’s. Shostakovich adapted and recovered artistically; Popov did not. With this excellent new recording of Popov’s early 1st Symphony, Leon Botstein and the London Symphony show us just how big Popov might have been. There are echoes of Shostakovich’s tart writing, but there is also much that is original.

On the 70th anniversary of the completion of Popov’s Symphony No. 1, Botstein and the London Symphony Orchestra bring the work to life on a new Telarc recording that also includes Shostakovich’s Theme and Variations, Op. 3. Popov’s Symphony No. 1 “fits into the category of great music in the orchestral repertory that requires advocacy,” says Leon Botstein. “This symphony is a case in which a totalitarian state forced a work into obscurity and ultimately undermined the great talent that Gavriil Popov was”.

Admired by Prokofiev and Shostakovich but suppressed in Russia as “formalist,” Gavriel Popov’s Symphony No. 1, Op. 7 (1934), is the most daring of his six symphonies, a work of brutal violence and brooding mystery which, quite clearly, had the wherewithal to offend the Soviet authorities. Only gradually has it entered the repertoire in the West, largely through the efforts of conductor Leon Botstein and a few others. This turbulent work evokes memories of Stravinsky’s Le Sacre du printemps and Prokofiev’s Scythian Suite, and also bears some comparison to Shostakovich’s Symphony No. 4 – similarly banned for its modernism – so strong are its dissonances and restless, frequently atonal counterpoint. The London Symphony Orchestra, directed by Botstein, gives a charged reading, filling the first movement with nervous energy, the lyrical second movement with foreboding, and the Scherzo finale with savage sarcasm; the performance is a convincing argument for this rugged work’s revival. The Theme and Variations, Op. 3 (1922), by Shostakovich is an early work of modest proportions. This charming but derivative student work seems an odd choice as filler, since it dispels the impact of Popov’s Symphony and closes the disc on a weak note. Telarc’s DSD recording is fine, though the sound is a little distant in soft passages.