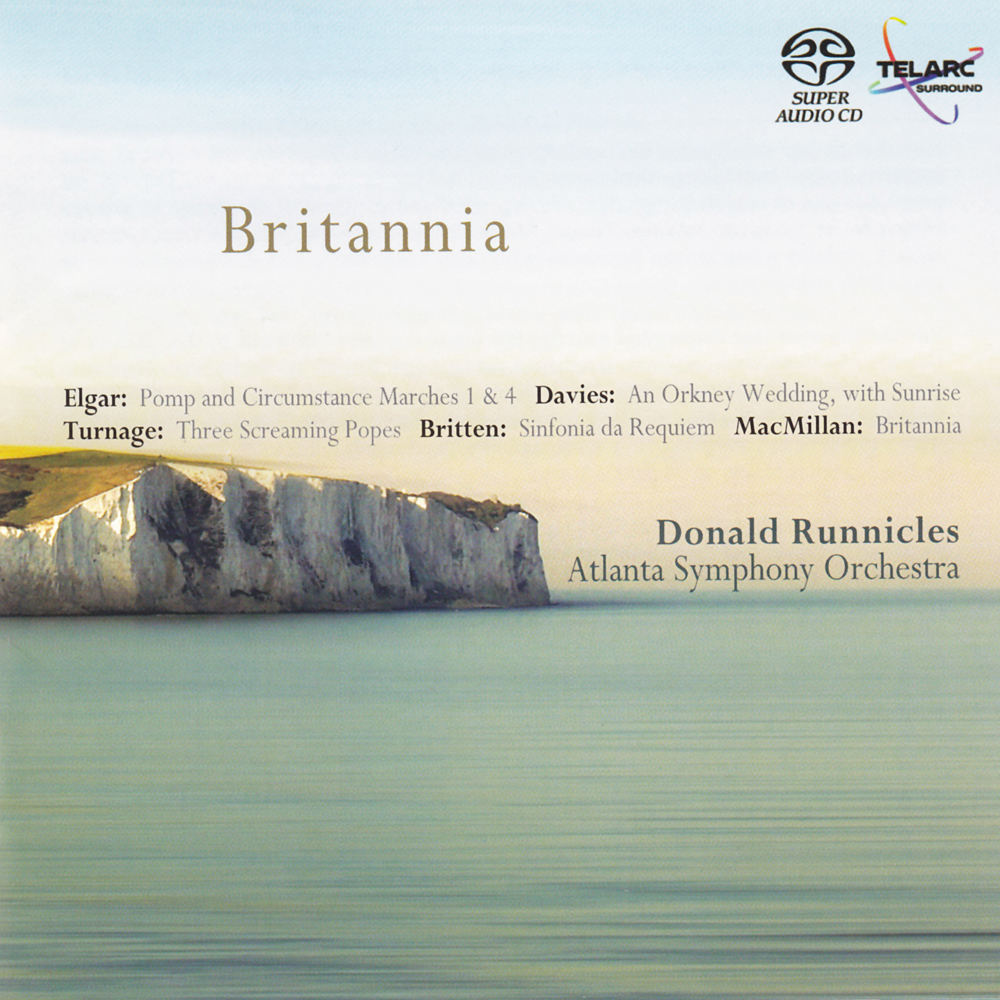 The Atlanta SO play brilliantly for Runnicles, and aside from coolly matter-of-fact performances of two of Elgar’s Pomp and Circumstance marches, the conductor proves a persuasive interpreter of some challenging scores.

Except for the Britten, this is a kind of highbrow British pops collection, featuring three accessible post-modern dazzlers bracketed by two of Elgar’s most enduring audience-pleasers. I don’t mean to suggest anything schlocky in the Maxwell Davies, the Turnage, or the MacMillan. But An Orkney Wedding, with Sunrise , which slowly dissolves into delightfully alcoholic chaos, is surely one of Maxwell Davies’s more approachable scores: the melodic material has a strong folk profile, and the rhythmic and harmonic thorns are all justified by the programmatic intention. Turnage’s musical response to Francis Bacon’s paintings is a bit tougher on the ears, but it too has a popular substratum (in this case, Spanish dances) and it, too, makes its impact more through hedonistic riotousness than through intellectual challenge.

Commissioned for the Association of British Orchestras and consequently widely performed, MacMillan’s Britannia has a more serious intent. Although described by the composer as a “fantasy based on ‘patriotic themes’” (including drinking songs and samplings from Elgar’s Cockaigne ), its crazy quilt of quotations is closer in spirit to Bolcom’s Piano Concerto (24:3) than to Charles Ives, less a celebration of national spirit than a rumination on “petty chauvinism.” Still, its Dadaesque hijinks (including appearances of auto horns, police whistles, and duck calls) are comical as well as critical. There’s nothing here as grim, say, as Holst’s similarly prophetic Mars. In this high-spirited company, Britten’s Sinfonia da Requiem seems distinctly out of place—longer, darker, more severe than anything else on the program. It’s particularly jarring to have its final plea kicked aside by the boisterous opening of Pomp 4 . Yes, you can program it out, but still, it gives the disc as a whole an odd balance.

No complaints about the performances, though. Runnicles is not the most demonstrative of conductors (the trios of the Elgar marches are notably free of sentiment)—but this music has so much built-in sensationalism that it really doesn’t need an extra kick from the podium; and I think the resulting readings, magnificently turned out by the orchestra, will hold up well on repetition. The engineering, especially in SACD surround, has tremendous impact as well, with nearly ideal clarity and spatial definition. All in all, warmly recommended.