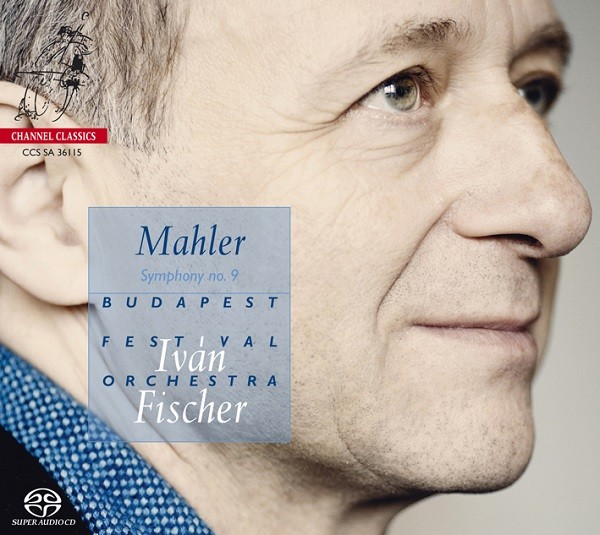 The 9th is a heartbreaking symphony, perhaps in many ways. It starts with an arythmic heartbeat which moves colourfully from one instrument to the next. The choice of instruments is extraordinary and somewhat sinister: cello, horn, harp, muted horn. Mahler immediately shows us his most mature, masterful handling of orchestral colours. Soon we realise that it is merely an introduction to a beautiful but heartbreakingly sad melody played by the violins, saying Leb wohl! Farewell!

A most complex, extremely forward-looking, visionary symphony follows, occasionally brutally interrupted by those arythmic beats and leading finally to the most tragic and beautiful ending Mahler ever composed: what he shares with us is his fading awareness of our beloved world.
Iván Fischer

Reviews:
Crescendo
(…) The fantastically tuned and homogeneous sound of the Budapest Festival Orchestra has no trouble depicting the great lyrical line and inner complexity of the jagged work as a compellingly logical, suggestive narrative thread, in addition to all the slim transparency and attention to detail, while the always muted, calm farewell mood is never pathetic or let sentiments drift away.

Classical CD reviews
The quiet, sustained high notes from the violins and woodwind have a beautiful, crystalline quality. (…)

Bay Area Reporter
(…) penetrating new live recording (…) it’s hard to explain how a performance this coherent and transparent can at the same time be so edge-of-your seat compelling.

Fono Forum
(…) Even the loosing ending breathes under Fischer’s hands (…) The overall rather mild and warm-hearted view of this extraordinary musician on Mahler’s symphonies led to particularly beautiful results in the Ninth.

Classics Today 4 out of 5
Iván Fischer conducts a lovely, impulsive Mahler Ninth (…) Fischer keeps the brass under control throughout, but this only makes those moments they really cut lose all the more powerful. (…) The finale is gorgeous (…) Channel Classics provides its usual superb SACD sonics, making this a Mahler Ninth that’s not to be missed.

Audiophile Sound Italy 5 out of 5
This then on its own terms and within the confines of modern Mahler interpretation, is a magnificent performance (…) The sound is superb in DSD format, but stunning in native playback.

Audiophile Audition
Any new recording of Channel Classics is worthy of note, and this interesting and incisive performance by Ivan Fischer and the Budapest Festival Orchestra makes this SACD something worth talking about (…) A thrilling combination of musicianship with an audiophile-pleasing recording.

BBC Music Magazine4 out of 5
For those who can’t have too much of this masterpiece, Fischer is essential fot further enlightenment. (…)

Audiophile Audition 4 out of 5
We’ve grown accustomed to superb recordings from Channel Classics, and this 5.0 SACD is no exception. The recording is natural, with a solid image of the orchestra up front. I hear hints of the brass from the surrounds during crescendos, making the recording space come alive. Strings are beautifully rendered, and the low end has a realistic punch.

I’ll return to the Fischer frequently, for the joyful marriage of audiophile quality and the exuberant performance.
Mel Martin

The Guardian
“I can’t stop playing the last movement of this recording. Mahler’s long farewell – Adorno once called it “staring into oblivion” – is given heartbreaking intensity and tenderness by the Budapest Festival Orchestra, always an ensemble of great character and conviction. This account is superb for the orchestra’s deep, old-world sound, for a generosity of expression that clinches the work’s turmoil but draws radiantly life-affirming conclusions. Fondness cuts to brute violence in opening; the Ländler is sturdy and sincere, a blur of swirling couples from a bygone Vienna, and the Rondo has an earthy vigour that reminds us where this orchestra comes from.”

Het Parool
A bit of Mahler enthusiast will of course already have at least ten different versions of the Ninth Symphony in their collection. But even if there were twenty or thirty, or all five hundred (a rough estimate), there is still room for one more: namely the performance of the Budapest Festival Orchestra conducted by Iván Fischer.

NRC 5 out of 5
Thrillingly dosed Mahlerian emotion (…) It is inevitable that the Mahler cycle by conductor Iván Fischer with his Budapest Festival Orchestra will become the Mahler collection of our time. (…) Here too, Fischer opens your ears to Mahler’s dark feeling for the undercurrent of his time, for brilliantly balanced orchestrations.

Stereophile Magazine
A bit of the 3rd movement of Mahler Symphony 9, as performed by Iván Fischer and the Budapest Festival Orchestra on a new Channel Classics recording was especially impressive for the air surrounding the orchestra, and the manner in which the system clearly conveyed the composer’s emotional turmoil. Brass sounded especially convincing. So was the bass . . . until we turned up the volume and the fixtures in the room began rattling.