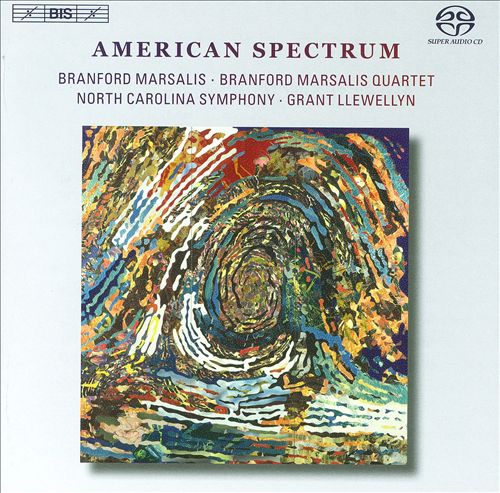 Composed between 1963 and 2005 these four works form a spectrum that demonstrates a tendency among composers of American concert music to draw from a wide range of musical streams; classical, popular, folk and jazz in order to reach out to their listeners.

The American Spectrum title of this disc doesn’t really do it justice; “spectrum” is one of those throwaway terms that put people off concert music, and the disc really is quite focused on a particular strand of American music. The combination of program and performers, moreover, displays a canny understanding of the American scene on the part of Sweden’s BIS label, which could easily have engaged one of the country’s big-name orchestras. Instead, the label chose a good regional ensemble, the North Carolina Symphony under Welsh conductor Grant Llewellyn, which has had to fight for an audience in a way that European groups generally do not, and put that ensemble together with some generally unfamiliar music relevant to the longstanding encounter between American concert music on one hand and jazz and pop on the other. The result is an energetic program that examines several forms that relationship has taken. Michael Daugherty’s Sunset Strip, one of his consistent crowd-pleasers, sets a sort of neo-Ivesian collage of musical styles from the famed Los Angeles boulevard against Daugherty’s trademark propulsive rhythms. John Williams’ Escapades for alto saxophone and orchestra are drawn from his score for Steven Spielberg’s Catch Me If You Can (2002), which used jazz to evoke the 1960s setting of the film; Williams calls it “an impressionistic memoir of the progressive jazz movement,” and saxophonist Branford Marsalis is admirably equipped to carry it off. Marsalis returns with his quartet for the little-heard Lions (A Dream), for jazz quartet and orchestra, composed in 1963 by Ned Rorem. The composer’s account of the work’s origins, rather impressionistic in itself, is included (it was suggested by a recollection of a dream of lion cubs); the work itself gives the jazz combo quite a bit of room to go off in different directions, which is surprising in that Rorem was not especially known for his use of jazz. The dance theme is transfigured, one might say, in the final Friandises of Christopher Rouse, who draws loosely on the Baroque suite with an Offenbach-like galop for a finale. BIS has issued several discs featuring the music of Rouse, who seems to be finding an ongoing place in concert repertories. The program hangs together — it’s both fun and instructive — and if the North Carolinians’ strings don’t have the sheen of those in the Cleveland Orchestra or the Chicago Symphony, the group has better instincts for this music, and the sonics are superb.