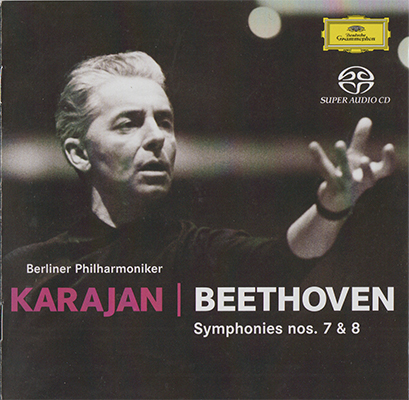 [review on the complete reissue series] I acquired this set, originally recorded in sessions in 1961 and 1962, as part of the process of comparing performances of Beethoven’s 5th on SACD and have since been listening to the other symphonies. Except for the 8th and 9th symphonies, this was my first exposure to this Karajan cycle. I acquired those LP’s of the 8th and 9th in the early 70’s, and then acquired the entire mid-seventies set, again on LP. Critical consensus at the time was that the newer set superseded the earlier one, so I saw no need to acquaint myself with it until now. I haven’t heard the later set for many years now, so I’m not in a position to do a detailed comparison.

In general, I like this cycle very much, although it has its flaws. If Sony were to release the slightly earlier Szell/Cleveland complete on SACD I could easily imagine preferring that one virtually across the board, and as I noted, I also think Vanska’s new 5th symphony is superior to Karajan’s. However, there is a lot of spirit and joy in this cycle, something Karajan wasn’t always accused of. It proves that it always pays to listen with open ears before passing judgment.

Generalizing, I find the textures to be string dominated, with brass and wind relatively recessed. Masur, for example, in his set (I bought that one, too, review to come) does a better job than Karajan in bringing out wind detail. Percussion is quite emphatic, however, and it sounds like the timpanist is using hard sticks. A combination of the reverberant acoustic in the Jesus Christus Kirche, free bowing (more below) and a tendency for under articulation leads to a sweet, even gooey (don’t know how else to describe it) string sound. The composer/conductor Bruno Maderna once referred to Karajan’s “chocolate” Beethoven, and I now understand what he meant.

Richard Osborne’s excellent biography of Karajan (Herbert von Karajan, a Life in Music) relates that Karajan allowed his string players to bow freely. Given HvK’s reputation, I found this hard to believe when I read it, even from as authoritative source as Osborne, but hearing these recordings I can well believe it. Most conductors require their string players to bow in unison, and typically mark the parts to show the bowings they want. With free bowing, you get a lusher but also less precise string sound, which is evident in many of these recordings. There are even a few instances (such as the first movement of the 4th) where the ensemble lapses are noticeable, possibly due to the use of free bowing. Leopold Stokowski was another famous advocate of free bowing, by the way.

With a few exceptions, tempos are relatively swift, and Karajan has a tendency to insert retards before codas and at the end of movements. Repeats are not taken in the first movements of the Eroica, Pastoral and 7th.

The most successful performances are the Eroica, the 4th, (despite a few retards announcing the trio sections in the scherzo), the 5th, and the 9th. These will sweep you along, but without slighting the music. I’m not crazy about Kmentt (the tenor) in the 9th, but the rest of the vocalists are superb, as are the Wiener Singverein. Karajan sets tempos that make utter sense in the context of the music, and pays close attention to tempo relationships as well. I am convinced by Karajan’s way with the 7th for the first and second movements, but he loses me in the scherzo where he follows the tradition of converting the trio into a virtual dirge. While the score indicates a much slower tempo than the presto, listen to Toscanini (the incandescent 1936 NYPO recording) for an object lesson in the tempo relationships in this movement. To be fair, most conductors follow the tradition here for a very slow trio, but it is way more effective played up to the tempo indicated in the score. In the last movement, I feel that Karajan overplays the countermelody at the expense of the main line.

Karajan’s Pastoral is controversial, with a very fast tempo in the first movement. I’m in a minority to think it works, mostly due to the beautiful string playing from the Berliners, but I too prefer a slightly slower pace, and a repeat if I can get one. Great storm. I have found that my own first choice for the Pastoral is idiosyncratic, since no one else seems to share this – Reiner and the CSO-just an absolutely beautiful performance, relaxed, limpid, stunning. Hope it comes out on SACD.

The first two symphonies feel overblown to me-large orchestra, emphatic rhythms, relatively moderate pacing of the scherzos-not bad, but not as good as these can be played. The 4th symphony, as noted, is very good. The 8th is quite good for 3 of the 4 movements, but I’ve always felt that Karajan’s tempo for the 3rd movement is just too slow. Osborne, in his notes to the set, calls Karajan’s tempo “ponderous” – I totally agree.

I cannot comment on the sound of this release vs. earlier incarnations – my LP’s of the 8th and 9th are long gone. In general, the sound is good, but over reverberant for my taste, which leads to a certain opaqueness-at times I feel like I have to peer through a slightly fogged over window to see the performance, if I can use an analogy.

The packaging of this is first class. I really appreciate the layout – symphonies are coupled consecutively, which I much prefer. There is the bonus rehearsal disc (haven’t heard it yet), and some excellent notes from Osborne. As individual recordings, the discs of the Eroica and 4th symphonies, and the 9th are highly recommended; however, I believe there is a lot of merit in listening to an entire cycle, and certainly this one afforded hours of unexpected pleasure; even with the flaws I’ve mentioned. ~sa-cd.net