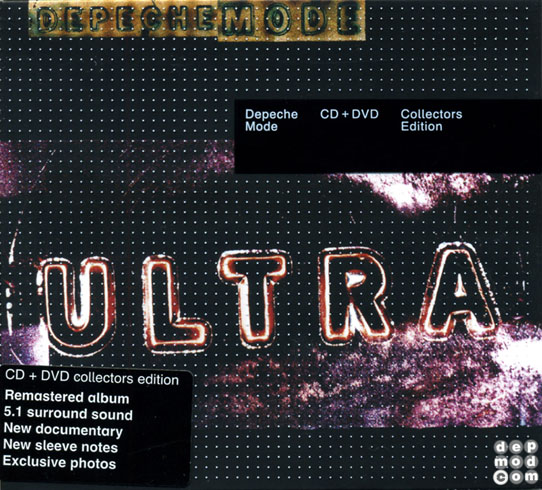 Ultra is the ninth studio album by the English electronic band Depeche Mode, released on 14 April 1997 by Mute Records. The album was the band’s first since the departure of Alan Wilder, who had left the band in 1995 having become disillusioned with life in Depeche Mode. Wilder’s departure and lead singer Dave Gahan’s drug problems, which culminated in a near-fatal overdose, had caused many people to speculate that the band was finished.This is their first album as a trio since 1982’s A Broken Frame, along with it being their first album where the band themselves were not involved with production.

Ultra debuted at number one on the UK Albums Chart and at number five on the Billboard 200. By April 2006, the album had sold 584,000 copies in the United States.The project was initially conceived as an EP.

In 1999, Ned Raggett ranked the album at number 50 on his list of “The Top 136 or so Albums of the Nineties”. That same year, the annual Ultra Music Festival in Miami was named after the album by its co-founder Russell Faibisch,and acknowledging its influence on the Polish rock scene, Tylko Rock ranked it at number 71 in its list of “100 Albums That Shook Polish Rock.”

When news surfaced in 1995 that Alan Wilder had departed Depeche Mode to concentrate on his solo project Recoil, the immediate concern among fans was whether the band would be able to hit past heights again. Though Wilder’s profile was always much lesser than that of Martin Gore and David Gahan — and almost even that of Andy Fletcher, whose nonperformance live has always been a running joke in the fan community and who freely admits to generally being around merely to maintain a vibe with his childhood friend Gore — his capability at arranging the songs over the years gave the band its increasingly distinct, unique edge. Combined with Gahan’s near suicide and lengthy recovery from drugs, things looked bleak. Happily, Ultra turned out a winner; hooking up with Tim Simenon, longtime U.K. dance maven and producer of arty fare such as Gavin Friday’s Adam ‘n’ Eve, Depeche delivered a strong album as a rejuvenated band. The most immediate change was Gahan’s singing; for the first time ever, he took singing lessons beforehand, and his new control and projection simply shines, especially on the marvelous “It’s No Good,” a pulsing, tense, yet beautiful song with another deeply romantic Gore lyric. Opener “Barrel of a Gun” continues in the vein of arena-level stompers like “Never Let Me Down Again” and “I Feel You,” with huge drum slams and scratching to boot, but Ultra mostly covers subtler territory, such as the slightly creepy “Sister of Night” and the gentle “The Love Thieves.” Gore sings two winners: the orchestral, slow dance groove “Home” and “The Bottom Line,” featuring steel guitar and Can’s Jaki Liebezeit on drums, distinctly different territory for Depeche. Closing with “Insight,” a quite lovely, building ballad, Ultra showed Depeche wasn’t ready to quit by any means.  ~~ AllMusic Review by Ned Raggett