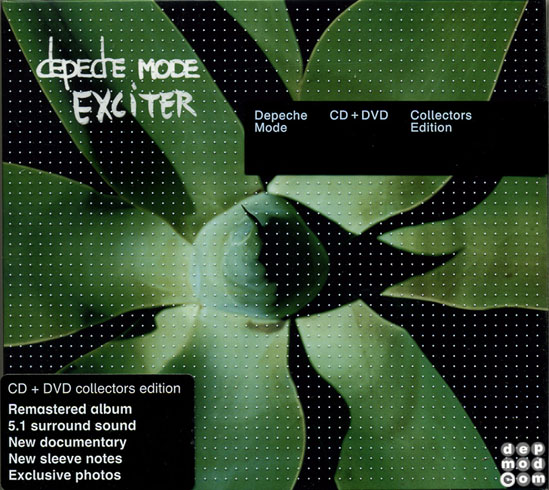 Exciter is the tenth studio album by the English electronic music band Depeche Mode, released in the United Kingdom on 14 May 2001 by Mute Records and in the United States on 15 May by Reprise Records. The album was produced by Mark Bell of Björk and LFO fame. The album also launched the Exciter Tour, one of the band’s most successful tours.

Exciter debuted at number nine on the UK Albums Chart and at number eight on the Billboard 200, selling 115,000 copies in its first week in the US.It is the only Depeche Mode album to debut higher in the US than in the UK. As of April 2006, Exciter had sold more than 426,000 copies in the US, and was certified Gold by the Recording Industry Association of America (RIAA). The album was also certified Gold in Canada for shipments of 50,000 units.The remastered album was released on “deluxe” vinyl 30 March 2007 in Germany and 1 October 2007 internationally.

The plant that appears on the cover is the agave attenuata, a species of agave sometimes known as the “lion’s tail”, “swan’s neck,” or “foxtail” for its development of a curved stem, unusual among agaves. It is used to produce tequila.

It’s rare to find bands capable of keeping their own best qualities to the fore while trying something new each time out, but Depeche Mode demonstrate that balance in full on the marvelous Exciter. Arguably the first album made by the group as a cohesive unit since Violator (and bearing some resemblance to that record in overall title and song names — compare “The Sweetest Condition” with “The Sweetest Perfection”), Exciter finds the trio again balancing pop catchiness with experimental depths. As with Ultra, an outside producer helps focus the end results in new, intriguing directions — in this case, said producer is Mark Bell, known for his work with Björk but also as part of Warp Records’ flagship act LFO, which always acknowledged their own debut to Depeche. Bell’s ear for minimal, crisp beats and quick, subtle arrangements and changes suit Martin Gore’s songs beautifully. If there are few storming arena-shaking numbers this time out, the exquisite delicacy throughout is addicting, with Gore’s guitar providing slippery and stinging leads to the smoky, romantic flow of Exciter. “When the Body Speaks” is a particular winner, his gentle work and a backing string section combining just right. David Gahan’s voice, already audibly benefiting from lessons on Ultra, is even more supple and passionate than before, ranging from the fuller delivery on the snaky charm of “Shine” to the haunting album-closer, “Goodnight Lovers,” a romantic lullaby with perfect counterpoint backing vocals. Gore’s own singing remains equally fine, as does his lyrical obsessions on, well, obsession — “Breathe,” which quotes more Bible names per verse than most preachers, makes for a good example on both fronts. When the band fully crank it up, the results work there too — “The Dead of Night” makes for a far superior nod to Gore’s glam roots and Depeche’s own industrial dance descendants than Songs of Faith and Devotion’s “Rush” did.  ~~ AllMusic Review by Ned Raggett