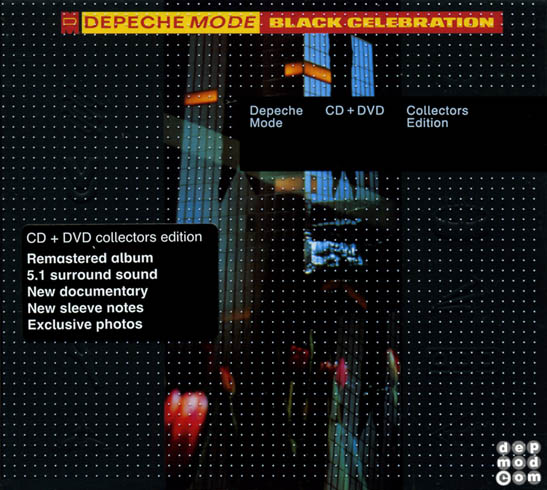 Black Celebration is the fifth studio album by English electronic music band Depeche Mode, released on 17 March 1986 by Mute Records. The album further cemented the darkening sound created by Alan Wilder which the band later used for the acclaimed and globally successful albums Music for the Masses, Violator and Songs of Faith and Devotion, sound that was initially hinted towards on their albums Construction Time Again and Some Great Reward.

Despite not being a commercial success at the time its official release, as the band said in 1998 during an interview available on The Videos 86–98 DVD, Black Celebration has been cited as one of the most influential albums of the 1980s.To promote the album, the band embarked on the Black Celebration Tour.

Three years after its release, Spin ranked it at number 15 in its list of “The 25 Greatest Albums of All Time.”

Whether the band felt it was simply the time to move on from its most explicit industrial-pop fusion days, or whether increased success and concurrently larger venues pushed the music into different avenues, Depeche Mode’s fifth studio album, Black Celebration, saw the group embarking on a path that in many ways defined their sound to the present: emotionally extreme lyrics matched with amped-up tunes, as much anthemic rock as they are compelling dance, along with stark, low-key ballads. The slow, sneaky build of the opening title track, with a strange distorted vocal sample providing a curious opening hook, sets the tone as David Gahan sings of making it through “another black day” while powerful drums and echoing metallic pings carry the song. Black Celebration is actually heavier on the ballads throughout, many sung by Martin Gore — the most per album he has yet taken lead on — with notable dramatic beauties including “Sometimes,” with its surprise gospel choir start and rough piano sonics, and the hyper-nihilistic “World Full of Nothing.” The various singles from the album remain definite highlights, such as “A Question of Time,” a brawling, aggressive number with a solid Gahan vocal, and the romantic/physical politics of “Stripped,” featuring particularly sharp arrangements from Alan Wilder. However, with such comparatively lesser-known but equally impressive numbers as the quietly intense romance of “Here Is the House” to boast, Black Celebration is solid through and through. ~~ AllMusic Review by Ned Raggett