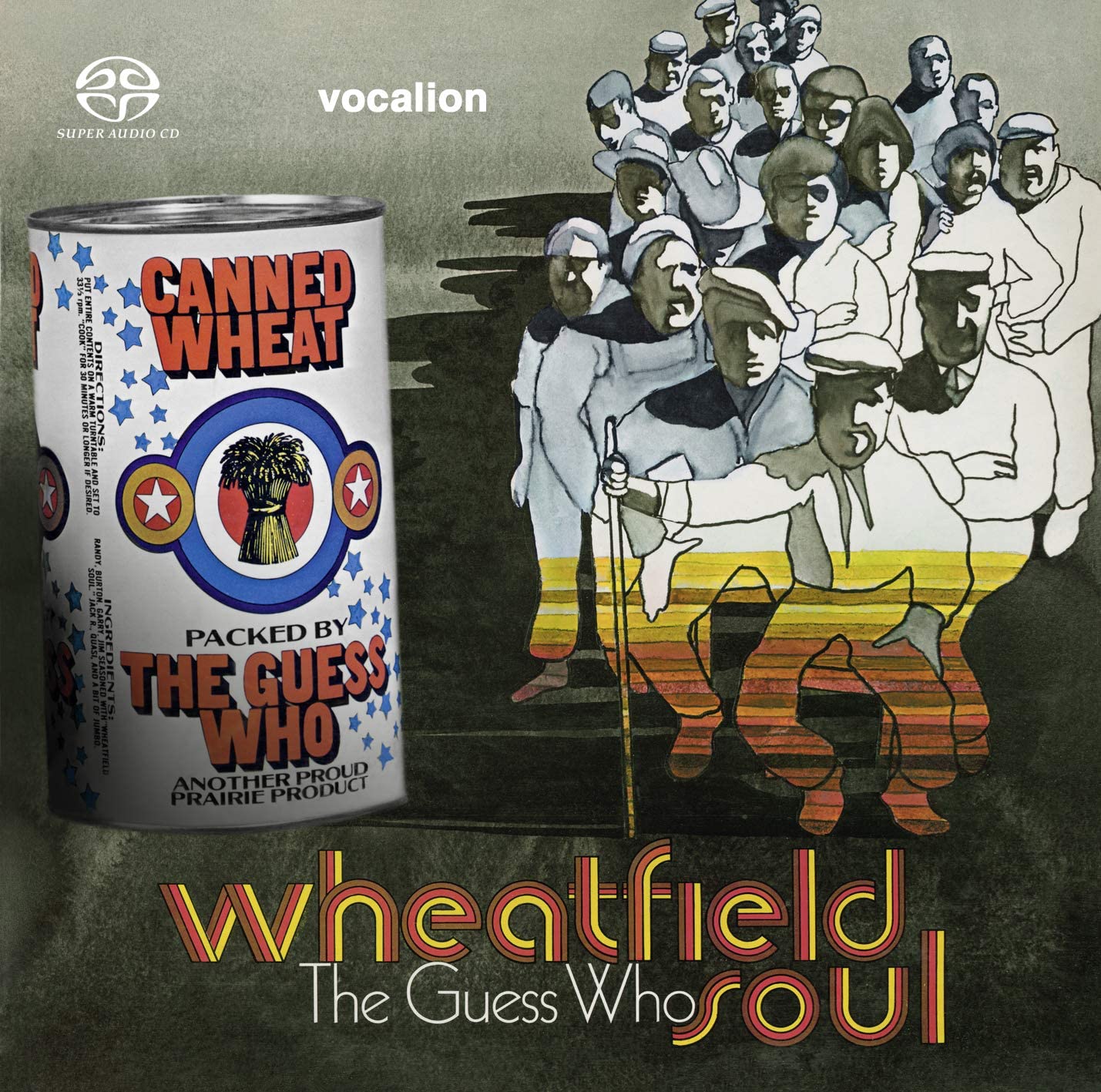 While the Guess Who did have several hits in America, they were superstars in their home country of Canada during the 1960s and early ’70s. However, further American success eluded the Guess Who until the 1969 Top Ten hit “These Eyes”; the recording session for the accompanying album, “Wheatfield Soul”, was paid for by producer Jack Richardson, who mortgaged his house to do so. “Canned Wheat” produced three Top 40 singles later that year. This Dutton Vocalion’s reissue combines both these albums, remastered from the Original Master tapes by Michael J. Dutton.

Wheatfield Soul
Wheatfield Soul by the Guess Who has become a collectors item of sorts over the years, fetching various prices in fan circles, and it is an important “first” step for the reconstituted group which initially hit with “Shakin’ All Over” when it was led by Chad Allan. The album is Jack Richardson’s excellent production of Randy Bachman and Burton Cummings’ music played by this particular four-piece unit, which Peter Clayton’s liner notes claim were together “for three years when they cut this album in late 1968.” The naïve sound of Cummings’ voice on the album tracks is charming, but the hit “These Eyes” has that authority which the band would repeat on diverse chart songs like “No Time,” “American Woman,” and even “Star Baby” further down the road. “Pink Wine Sparkles in the Glass” is a precursor to “New Mother Nature,” but the solo Cummings composition “I Found Her in a Star” is very nice Guess Who-style pop that their fans adore. “Friends of Mine” is a strange one, though, ten minutes and three seconds of Burton Cummings imitating Jim Morrison, not just Morrison, but the copping of his vocal riffs straight from “When the Music’s Over.” This is a band stretching and searching for direction, and rather than hit you with hard Randy Bachman assaults which were a welcome addition to future long-players by this group, as well as Bachman-Turner Overdrive, Wheatfield Soul concentrates on Brit-pop and experimental songs. Randy Bachman’s “A Wednesday in Your Garden” is British rock meets jazz, and is one of the LP’s most interesting numbers. The Chick Crumpacker and Don Wardell liner notes to Ultimate Collection note that “These Eyes” “was technically the 18th release by the band.” The key is that it was the first from the quartet of Cummings, Bachman, Kale, and Peterson as produced by Jack Richardson. Ultimate Collection also notes that “Lightfoot” was written for “fellow Canadian Gordon Lightfoot.” The notes go on to point out that “Maple Fudge” and “We’re Coming to Dinner” were real oddities, but a style that would reappear over the band’s long and illustrious catalog. Maybe that’s what makes Wheatfield Soul so sought after, inventive themes that eventually found their way onto later albums like Artificial Paradise and Rockin’. Perhaps the tragedy is that they didn’t get to work with Frank Zappa – the Guess Who’s left-field musings would have been the perfect follow-up to Zappa’s work with Grand Funk. Take two of “Lightfoot” appears on Ultimate Collection, which only utilized three songs from this important first album after the band was reborn. But for all the musical wandering, it is “These Eyes” which remains timeless, the song that stands out as the masterpiece on this creative adventure.

Canned Wheat
As far as late-’60s and early-’70s rock bands go, the Guess Who has been both blessed and cursed. Blessed because their songs are still played quite frequently on oldies radio stations, cursed because they’re only remembered for those songs. Truth be told, the Guess Who was a darn good rock band: Burton Cummings’s great rock & roll voice – similar in power to Bad Company’s Paul Rodgers – keeps even the most overdone Guess Who song fresh, and Randy Bachman’s underrated guitar work always serves the song’s needs. “Undun”‘s wonderful, jazzy riff, which fits the song perfectly, is associated with the overall sound of the Guess Who, not Bachman. 1969’s cleverly-titled Canned Wheat introduced several of the band’s most remembered songs: “Laughing,” “Undun,” and “No Time.” The album also has six other keepers, including the mellow “6 A.M. or Nearer,” complete with jazzy guitar and flute, and the lovely ballad “Minstrel Boy.” The original version of “No Time” is fun, even if it isn’t radically different; little nuances, like the fade out, shake the listener out of the “I’ve heard this song a thousand times” syndrome. There are a couple of throwaway bonus tracks, “Species Hawk” and “Silver Bird,” that are nice to have, even if they aren’t up to the other material. The liner notes are helpful, and it’s funny to learn that radio stations ordered copies of “Undun” for airplay, not realizing that it was the B-side of “Laughing.” Canned Wheat still sounds incredibly fresh, a product from the heyday of classic rock. For those who want to dig beneath the band’s “oldie” status to find the real thing, this album shouldn’t be missed.