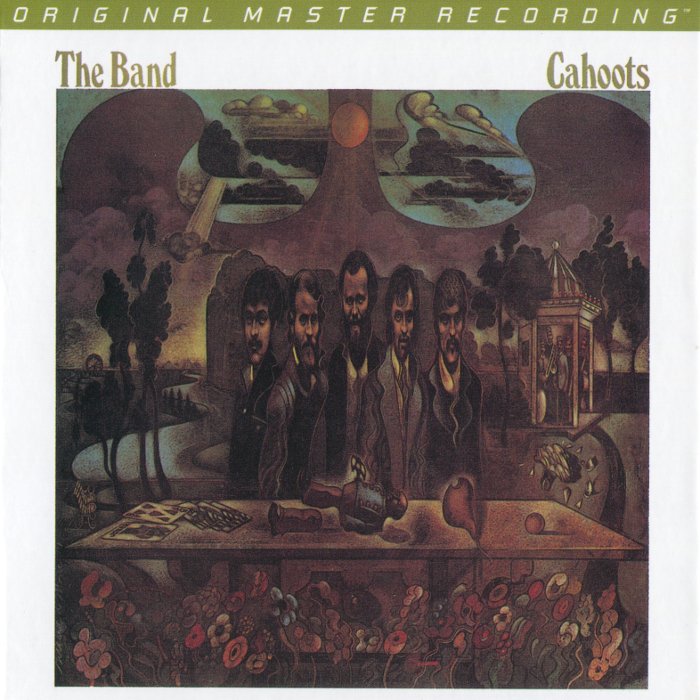 In comparison to its predecessors, Cahoots, the Band’s fourth album, may be characterized as an essentially minor effort that nevertheless contains a few small pleasures. These pleasures begin with the leadoff track, “Life Is a Carnival,” a song that continues the theme of Stage Fright by emphasizing the false nature of show business and its impact on reality. The song features a lively Dixieland horn chart courtesy of Allen Toussaint. “When I Paint My Masterpiece,” a Bob Dylan song making its recorded debut here as the second selection, is another welcome track, buoyed by mandolin and accordion in a charming arrangement appropriate to its tale of an odd trip to Europe. “4% Pantomime” is a duet between the Band’s Richard Manuel and Van Morrison that is entertaining to hear, even if the song itself is slight. Unfortunately, that just about completes the list of the album’s attractions. Annotator Rob Bowman claims that the overriding theme of the songs is “extinction and the sadness that accompanies the passing of things that once were held to be of great value”; actually, there is no overriding theme to the minor songs written by Robbie Robertson. Several of the songs’ lyrics come across as half-baked film scenarios, but they fail to be evocative, and they are paired to music lacking in structure. The failure is solely in the writing; the Band sounds as good as ever playing the songs, with singers Manuel, Levon Helm, and Rick Danko all performing effectively and primary instrumentalist Garth Hudson filling in the arrangements cleverly. It’s just that the material is not strong enough, particularly in comparison to the three impressive albums the Band had released previously.