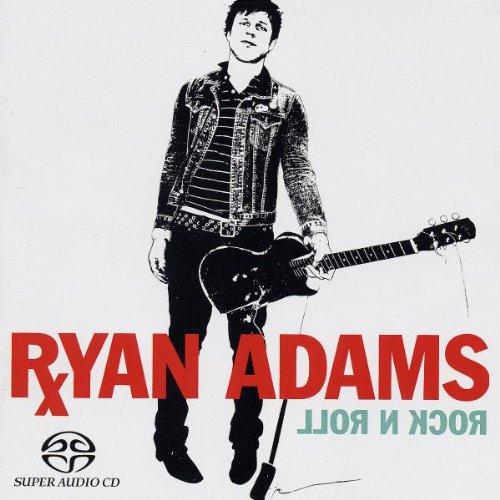 Rock N Roll is the fourth studio album by Ryan Adams, released on November 4, 2003. The album features the hit single “So Alive,” and includes guest appearances by Adams’s then girlfriend, actress Parker Posey, former Hole and Smashing Pumpkins bass player Melissa Auf der Maur, and Green Day’s Billie Joe Armstrong. Adams describes the album as “the most rock thing I have ever done”, and notes that in spite of the album’s mixed reception, recording it was “fun as fuck”.

Ryan Adams is the male Courtney Love — a hard-working hustler with impeccable taste who talks such a good game that it deliberately overshadows his music. Of course, Adams differs from Courtney in many crucial ways. For one, he’s a workaholic, recording and releasing more albums than he should, which also points out that, unlike Love, he doesn’t need a collaborator to help shove his songs over the goal. But the crucial similarity is that they’re both students of rock history, conscious of what accounts for good taste within rock crit land, from 1973 to 2003. They don’t just know the canon — they want to be part of the canon, to the extent that it seems that they want to be the artist that all rock history has inextricably pointed to (or to paraphrase the far more eloquent Morrissey, they want to be the end of the family line). Which is why it rankles Adams when he’s pigeonholed as an alt-country singer/songwriter (he’s right — he hasn’t been alt-country since he left Whiskeytown) when Jack White steals his spotlight by doing a related, but not similar, spin on roots rock: he’s so clearly the Important Artist of the Decade that he needs to pull the spotlight back on himself whenever it’s shining somewhere else.

With Gold in the fall of 2001, the wind was at his back — his enfant terrible schtick was still relatively fresh, “New York, New York” became a post-9/11 anthem, and the music was eclectic enough to break him out of the alt-country ghetto, even as it was rootsy enough to still play to that core audience. By 2003, things were getting a little dicey for Adams, partially because he wouldn’t shut up — either to the press or on his online blog; he said many things to both, the most noteworthy being a bizarre pseudo-feud with the White Stripes, where he yo-yoed between calling Jack White a genius and kid’s stuff — and partially because he had diarrhea of the recording studio, cutting more stuff than Lost Highway could possibly release, particularly because he was moving further away from the label’s core alt-country audience. They released the demos collection Demolition in 2002 but balked at Love Is Hell, his mope-rock tribute recorded with Smiths producer John Porter, but after some discussion, it was decided that Love Is Hell would surface as a pair of EPs, while Lost Highway would get a big, shiny new rock & roll record.

Wearing his intentions on his sleeve in a nearly cynical manner, Adams called the album Rock N Roll, though in a fit of rebellious piss and vinegar, the artwork has it displayed as a mirror image: Llor n Kcor, which isn’t quite Efil4zaggin, but the spirit is nonetheless appreciated. The title is so simple it belies the fact that this is a bit of a concept album on Adams’ part, a conscious attempt to better the Strokes and the White Stripes at their own game while he performs a similar synthesis of glam rock and Paul Westerberg while dabbling in the new new wave of new wave spearheaded by Interpol to prove that he can do the arty thing too (though that proof is reserved for the Jeff Buckley-aping Love Is Hell). It’s not just that the sound echoes bands from the past and future; the titles consciously reference other songs: “Wish You Were Here,” “So Alive,” “Rock N Roll,” and “Boys” borrow titles from Pink Floyd, Love and Rockets, Led Zeppelin, and the Beatles/Shirelles, respectively; “The Drugs Not Working” reworks the Verve’s “The Drugs Don’t Work,” “She’s Lost Total Control” is a play on Joy Division’s “She’s Lost Control,” “1974” harks back to the Stooges’ “1969” and “1970,” “This Is It” is an answer song to the Strokes’ “Is This It,” and “Note to Self: Don’t Die” apes Norm MacDonald’s catch phrase. These songs don’t necessarily sound like the songs they reference, but there sure are a lot of deliberate allusions to other styles and bands: tunes that sound a bit like the Strokes, songs that sound like Westerberg, tracks patterned after Interpol but sounding like U2, and the glam songs that are meant to sound like T. Rex or the New York Dolls but come out as Stone Temple Pilots.

While some of these songs suggest that the record was written in a hurry — instead of lyrics, “Wish You Were Here” sounds like a transcript of Tourette’s syndrome — many songs exhibit considerable studiocraft and songcraft, a reflection of Adams’ exceptional taste and skill as a musician. But while some of these songs are undeniably catchy, they’re essentially reactionary material — the sound of somebody responding to his influences and peers, sometimes in an alluring way, but not quite carving out a personal, idiosyncratic vision, the way Jack White does in the White Stripes (it’s not even close to how Ween genre-hops from speed metal to Jimmy Buffett yet makes it all sound like Ween, either). That said, it’s not a bad listen at all, particularly when Adams gets caught up in the sound of it all and sounds consumed by passion instead of mimicking it — for reference’s sake: “This Is It,” “1974,” “Luminol,” and “Burning Photographs” — but the artifice outweighs the substance throughout Rock N Roll. Which suggests that the mirror image in the title may be more than a clever typographic trick — it may be an admission that the album delivers the illusion of rock & roll instead of the real thing.