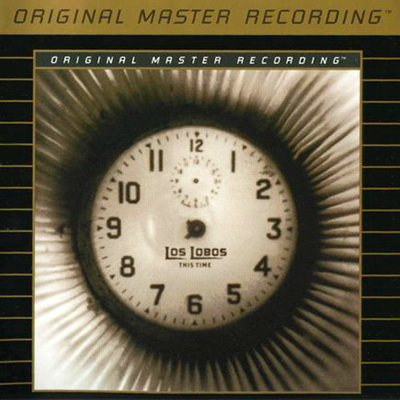 Given all the extracurricular projects members of Los Lobos pursued during the three years separating Colossal Head and its followup, it’s not surprising that they’ve decided to show off what they’ve learned on This Time, resulting in a record that vacillates between songcraft and sonic sculptures. It could be said that Kiko and Colassal Head were like this as well, but the difference is that This Time has the structure of a straight-ahead rock & roll record, clocking in at 38 minutes with 11 short tracks. While that conciseness is welcome, it also points out the flaws in the post-Latin Playboys Los Lobos — Cesar Rosas’ fine rockers are obscured by a layer of studio gauze, and David Hidalgo’s songs can seem like excuses to run wild in the studio. If the production was truly evocative or innovative, that wouldn’t be a problem, but This Time is another in a long line of murky, self-conscious productions from Froom, Blake, and Hidalgo, where creating sound is more important than making music. This is especially frustrating, since This Time has elements of a very good record — it’s paced well and boasts strong moments from both Hidalgo (“This Time,” “Turn Around”) and Rosas (“Oh Yeah,” “Cumbia Raza”). As it stands, it is Los Lobos’ tightest record since The Neighborhood, but it’s hard not to feel that it could have been better if Los Lobos saved the “explorations” for their side-projects.