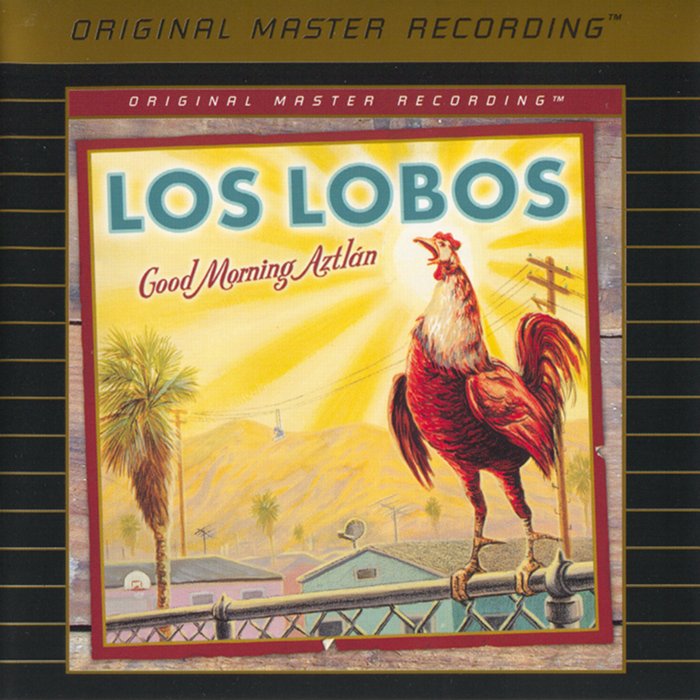 Great rock & roll bands aren’t supposed to be as modest as Los Lobos, an unlikely band comprised of five world-class musicians who write, sing, and play brilliantly, have been doing it for close to 30 years — and don’t appear to feel compelled to make a big show of it. Lack of flash should never be confused with a lack of creativity, of course, and their best album, 1992’s Kiko, showed they could bend traditional structures and play with the possibilities of the studio as well as any hipsters half their age. But straightforward meat-and-potatoes rock and soul have always been their strongest calling card, and their post-Kiko work with producer Mitchell Froom found them struggling to balance their more experimental instincts with their gifts as straight-ahead players, often with uneven results. Good Morning Aztlán finds Los Lobos working with a new producer, John Leckie, whose work with Radiohead, the Fall, and Kula Shaker confirms his credentials in helping to craft intelligent, creative music. But Leckie has also worked with Dr. John and Roy Harper, and knows the importance of letting a great musician simply play; as a result, Good Morning Aztlán sounds like Los Lobos’ strongest album since Kiko. Leckie has replaced Froom’s banks of tape-loop keyboards and webs of audio trickery with a solid, straightforward sound that reflects the band’s skills as one of rock’s most consistently impressive live acts, but he’s also caught them on tape with a batch of especially impressive songs, many of which deal with the nuts and bolts of life in the Hispanic community. Good Morning Aztlán swings from high-octane rock & roll (“Done Gone Blue”), soulful R&B (“Hearts of Stone”), passionate Latin grooves ( “Luz de Mi Vida”), and any number of combinations thereof, such as “Malaque”‘s slinky Latin melody set to a neo-hip-hop beat, or “Get to This,” which blends an old-school funk bottom with crunching rock guitars. And if Los Lobos prefer to write about small-p personal politics rather than Large-P Global Politics, their take on the sometimes funny, sometimes troubling stakes of life in Hispanic America makes it clear that they know what goes on in their neighborhood, and they have plenty of compelling things to say about it. Good Morning Aztlán isn’t hip, revolutionary, or groundbreaking — it’s just a superb album from one of America’s great rock bands.