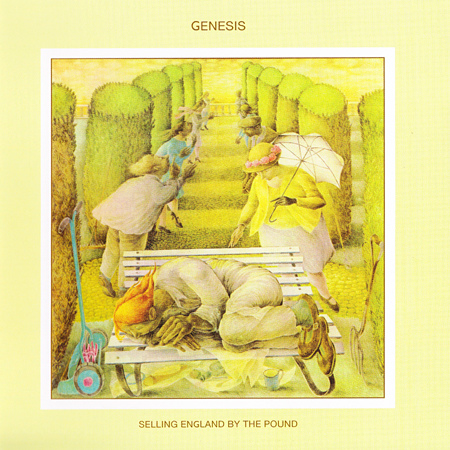 Genesis proved that they could rock on Foxtrot but on its follow-up Selling England by the Pound they didn’t follow this route, they returned to the English eccentricity of their first records, which wasn’t so much a retreat as a consolidation of powers. For even if this eight-track album has no one song that hits as hard as “Watcher of the Skies,” Genesis hasn’t sacrificed the newfound immediacy of Foxtrot: they’ve married it to their eccentricity, finding ways to infuse it into the delicate whimsy that’s been their calling card since the beginning. This, combined with many overt literary allusions — the Tolkeinisms of the title of “The Battle of Epping Forest” only being the most apparent — gives this album a storybook quality. It plays as a collection of short stories, fables, and fairy tales, and it is also a rock record, which naturally makes it quite extraordinary as a collection, but also as a set of individual songs. Genesis has never been as direct as they’ve been on the fanciful yet hook-driven “I Know What I Like (In Your Wardrobe)” — apart from the fluttering flutes in the fade-out, it could easily be mistaken for a glam single — or as achingly fragile as on “More Fool Me,” sung by Phil Collins. It’s this delicate balance and how the album showcases the band’s narrative force on a small scale as well as large that makes this their arguable high-water mark.