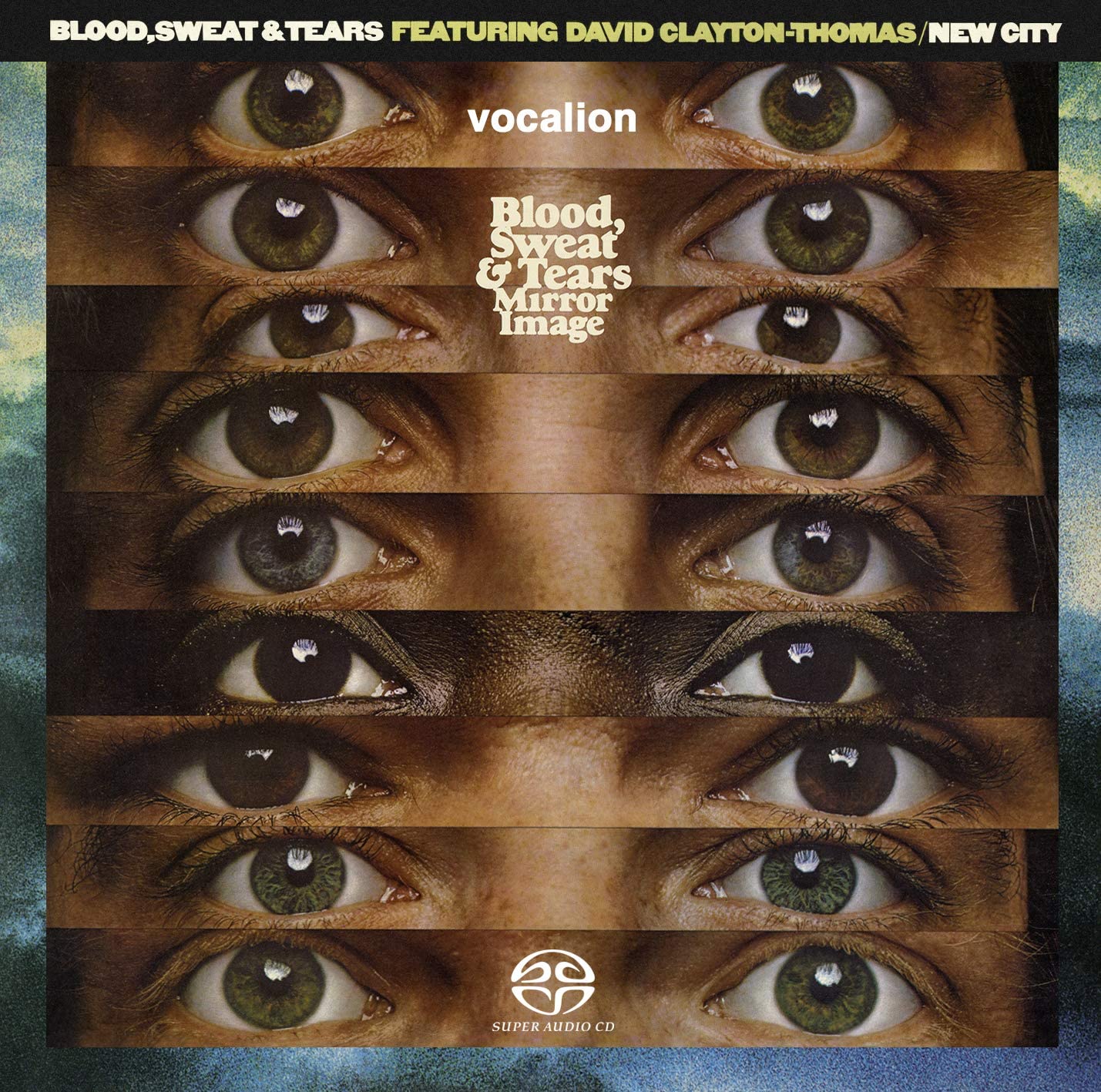 No American rock group ever started with as much daring or musical promise as Blood, Sweat & Tears, or realized their potential more fully – and then blew it all as quickly. From their origins as a jazz-rock experiment that wowed critics and listeners, they went on – in a somewhat more pop vein – to sell almost six million records in three years, but ended up being dropped by their record label four years after that. This Dutton Vocalion’s reissue combines pair of the band’s later albums – “Mirror Image” from 1974 and “New City” from 1975, remastered from the Original Master tapes by Michael J. Dutton.

Mirror Image
Without question, Mirror Image is the most atypical Blood, Sweat & Tears album ever. The last disc recorded before David Clayton-Thomas’ return to the fold, Mirror Image features three lead vocalists (Jerry Fisher, Jerry LaCroix and George Wadenius), three saxes (LaCroix, Bill Tillman and guest artist Arnie Lawrence) and only one trumpet (Tony Klatka). The album is uneven, but still has its moments, including “Tell Me That I’m Wrong” (a minor hit), “Are You Satisfied” and its (rock) reprise, and the concluding “She’s Comin’ Home,” where Klatka’s trumpet echoes Wadenius’ mournful vocal. It’s no “Hi-De-Ho,” but it’s got some surprisingly strong material nonetheless.

New City
In the late ’60s and early ’70s, Blood, Sweat & Tears was at the forefront of the rock with horns movement. But after lead singer David Clayton-Thomas’ 1972 departure, both he and the band lost their commercial footing. New City finds Clayton-Thomas reconvening with Blood, Sweat & Tears after a three-year absence. Jimmy Ienner, who produced hits with the Raspberries, Grand Funk Railroad, and Three Dog Night, is behind the boards for this 1975 album. It does sound promising, but, in all honesty, New City fortunes seemed doomed from the start. The cover of the Blues Image’s “Ride Captain Ride” turns out to be more than a perfunctory exercise and gives the band a chance to show its jazz chops, and Clayton-Thomas wails to his heart’s content. Allan Toussaint’s “Life” gets an irreverent and funky treatment. Strangely enough, the workouts on here pale in comparison to the ballads. The best track, the poignant “I Was a Witness to a War,” is delicately arranged in the perfect key for Clayton-Thomas’ subdued vocals. Janis Ian’s “Applause” sustains interest, even as Clayton-Thomas’ dramatic flourishes make Richard Harris seem remote. After a few ho-hum tracks, this closes with an energetic but anti-climatic cover of the Beatles’ “Got to Get You Into My Life.” Although New City failed to get the band back to the top of the charts, a listener might be pleasantly surprised to hear that the band did proceed through the ’70s accordingly.