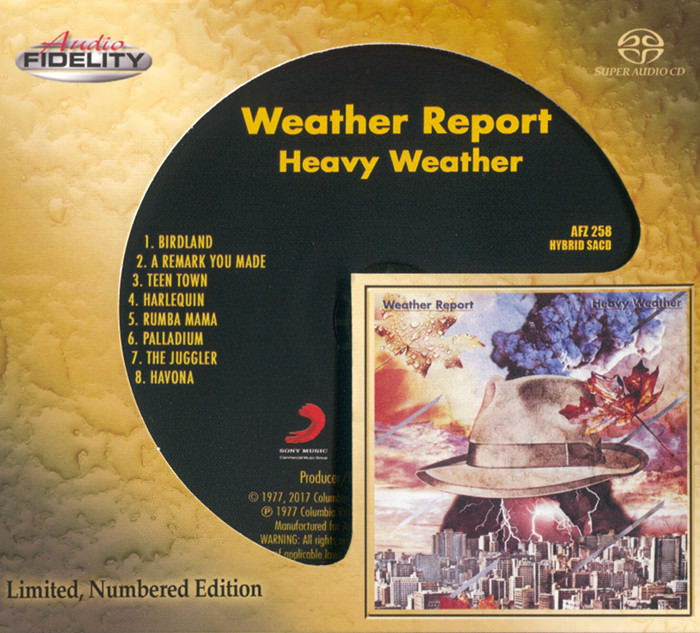 Weather Report were a jazz supergroup formed in 1970, best known outside the jazz world for their hit “Birdland”. Heavy Weather is Weather Report’s 7th album, released in 1977 through Columbia Records. It is the band’s 2nd album with bassist Jaco Pastorius. On Black Market, Pastorius played on 2 of the 7 tracks, but here he is a full member of the band. It is on the short list of LP’s considered to be the greatest of all Jazz-Fusion recordings.

Weather Report’s biggest-selling album is that ideal thing, a popular and artistic success – and for the same reasons. For one thing, Joe Zawinul revealed an unexpectedly potent commercial streak for the first time since his Cannonball Adderley days, contributing what has become a perennial hit, “Birdland.” Indeed, “Birdland” is a remarkable bit of record-making, a unified, ever-developing piece of music that evokes, without in any way imitating, a joyous evening on 52nd St. with a big band. The other factor is the full emergence of Jaco Pastorius as a co-leader; his dancing, staccato bass lifting itself out of the bass range as a third melodic voice, completely dominating his own ingenious “Teen Town” (where he also plays drums!). By now, Zawinul has become WR’s de facto commander in the studio; his colorful synthesizers dictate the textures, his conceptions are carefully planned, with little of the freewheeling improvisation of only five years before. Wayne Shorter’s saxophones are now reticent, if always eloquent, beams of light in Zawinul’s general scheme while Alex Acuña shifts ably over to the drums and Manolo Badrena handles the percussion. Released just as the jazz-rock movement began to run out of steam, this landmark album proved that there was plenty of creative life left in the idiom.