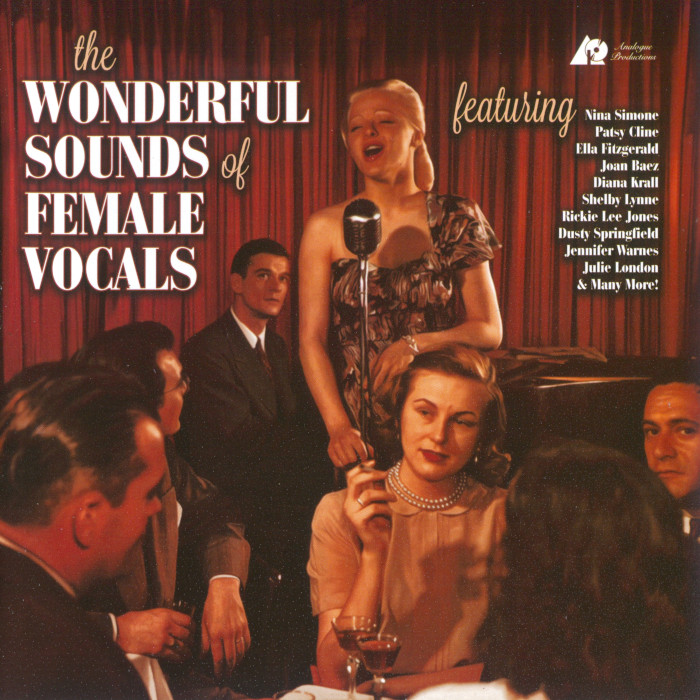 Female vocalists have forever been celebrated by audiophiles and music lovers alike. Whether the delivery is delicate or bombastic, a great female vocal well-recorded is just so sensuous. It’s the genre that most often typifies the potential of hi-fi and what it can do to engage our emotions. It’s no wonder the hallways of any hi-fi show will be resonating with the sounds of sparsely-arranged recordings of great women singers. It’s the genre that best shows off the systems that manufacturers and dealers are trying to sell. Now, you can have all of those best demo tracks on one album. Show stoppers by Julie London, Diana Krall, Rickie Lee Jones, Nina Simone, Janis Ian, Phoebe Snow, Jennifer Warnes, Dusty Springfield, Shelby Lynne and many more. Every single track is an audiophile demo classic.

I wrote this compilation’s liner notes and created the 22 song track order. Chad Kassem selected the female artists and the individual tracks sourced from albums he’d previously licensed and released on vinyl, SACD and high resolution download (maybe even R2R tape). The concept was simple enough: a collection of well-recorded female vocalists revered by audio enthusiasts as well as by music lovers in general. Since Kassem’s licensing choices hit sonic and musical bullseyes, all were guaranteed to sound good. But since they weren’t selected mindful of any particular concept, ordering them into a coherent “story” was the difficult if not impossible task I faced.

The sources all were high-resolution files, some DSD, some PCM, depending upon what Kassem was originally given in the digital domain, or in most cases what Gus Skinas produced in DSD using the original analog tapes. Anyone thinking why wasn’t this cut from tape is either insane or ignorant. Cutting from tape would have necessitated getting the originals, which would be both costly and time consuming (if at all still possible), and making a copy from the master of each song and then splicing them all together. This is a great sampler! (there I go again). Easy to recommend for the music and the consistently fine sound. And yes, the album title sounds like either Reader’s Digest lives or something hatched by Time-Life in the 1970s!
– Michael Fremer, analogplanet-com