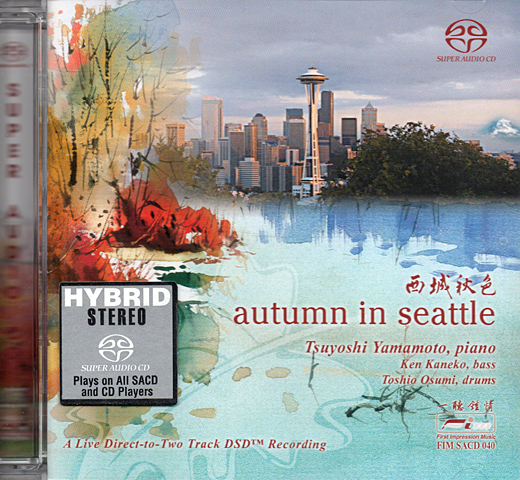 Autumn In Seattle is a world class smooth jazz album from peerless Japanese jazz pianist Tsuyoshi Yamamoto. Along with bassist Ken Kaneko and drummer Toshio Osumi, he has transformed this program of famous film themes into captivatingly beautiful jazz pieces.

Pianist Tsuyoshi Yamamoto has been a jazz artist for decades, and in ‘01 Winston persuaded him to do new renditions of some of his most-popular material for the album Autumn in Seattle. His accompanists are Ken Kaneko on bass and Toshio Osumi on drums. Winston describes the title tune as “warm, peaceful, even romantic,” and that pretty much sums all the music on the disc.

The first item is Marvin Hamlisch’s “The Way We Were” from the 1973 movie of the same name. The manner in which Yamamoto plays it, it sounds as laid back and friendly as most of us remember it from the film. Even more easygoing is Burt Bacharach’s “Raindrops Keep Fallin’ on My Head” from Butch Cassidy and the Sundance Kid, which takes flight from the outset under Yamamoto and never lets go.

Then we come to the title tune itself, “Autumn in Seattle,” which Yamamoto wrote specifically for the album. It’s sweetly atmospheric, and like the other numbers, it is all Yamamoto and his piano, which is lightly resonant and expressively lyrical. He follows “Autumn” with “Misty,” a perennial favorite, only this time he takes it at a “more energetic,” upbeat tempo than he says he usually does. His seeming improvisations breathe new life into an old warhorse, and he allows his sidemen to introduce the piece. Although it won’t be to everyone’s liking because the cherished melody is often hardly discernible, it does take on a pleasant verve of its own.

And so it goes through another half dozen tunes, mostly music from motion pictures: “Love Is a Many Splendored Thing,” the theme from Spartacus, a medley from The Sound of Music, “A Time for Us” from Romeo and Juliet, and one of own preferences, “As Time Goes By,” featured in Casablanca. Dooley Wilson, who couldn’t play the piano, would have been proud.

Probably the best, and best-sounding, track in the album, though, is “No Problem,” which Yamamoto says inspired him in high school to become a jazz pianist after hearing a version by Art Blakey. The tune allows Yamamoto to demonstrate a wide flexibility of tone and color and provides opportunity for his accompanists to shine as well.

FIM made the recording in 2001 in Onkio Haus, Tokyo, Japan, and audio engineer Michael Bishop remastered it in 2011 via FIM’s UltraHD 32-bit processing system. The original analog recording, done on a Studer A829, is extremely plush and very dynamic, with good air, ambience, and transparency. The piano sounds especially lifelike in its transient response, and the music exhibits taut bass and extended highs.