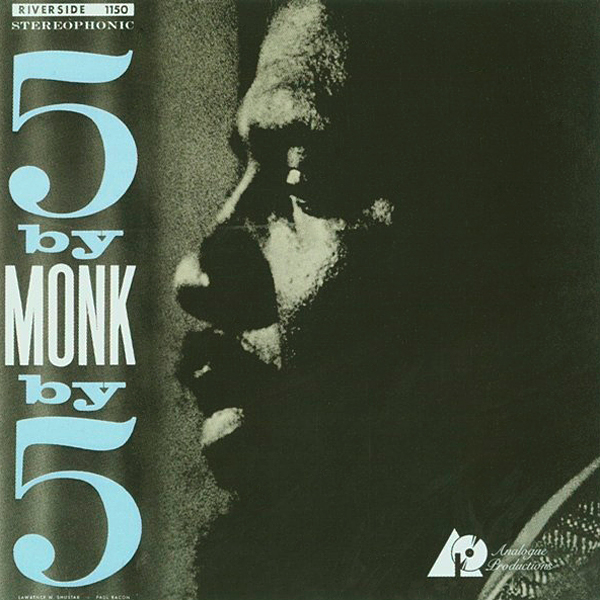 As the ’50s drew to a close, so did Thelonious Monk’s illustrious tenure on Riverside Records. In fact, the three dates needed for this title would be his penultimate for the label. The album’s concept placed five Monk originals into a five-person (read: quintet) setting. Ironically, this was the first time that Monk had recorded with a lineup that so prominently displayed a “standard” bop rhythm section with both a trumpet and sax player. The quintet on 5 by Monk by 5 (1959) finds the pianist supported by Thad Jones (cornet), Sam Jones (bass), Art Taylor (drums), and Charlie Rouse (tenor sax) – who would continue working with the artist as Monk’s (more or less) permanent tenor saxophonist for the majority of the ’60s. In what had become somewhat of a tradition, the disc’s program boasts several of Monk’s more established melodies coupled with a few recent works. One of those was “Jackie-ing” – named incidentally after Monk’s niece. It commences the disc exemplifying the loose, disjointed and exceedingly difficult scores that would define Thelonious Monk as a premiere composer, arranger, and bandleader. This seemingly unkempt sound flies in the face of Monk’s thoroughly disciplined keyboard playing, as well as a solid component within the context of the full ensemble – which he skillfully demonstrates not only on “Jackie-ing,” but on every entry within the long-playing effort. The songs’ opening jam is imbued with a hearty tug of war as Rouse’s animated lines tangle with Monk’s interjections and piano antics. Jones’ cornet is similarly worked into the tricky arrangements. To some, the sound – which is starkly disparate when compared to the timbre that exists among the comparatively subdued Rouse or Monk – can be notably disconcerting. When 5 by Monk by 5 was reissued in CD, the running order was augmented by two alternate takes of “Played Twice” – the other Monk-penned tune to have been debuted on the LP.