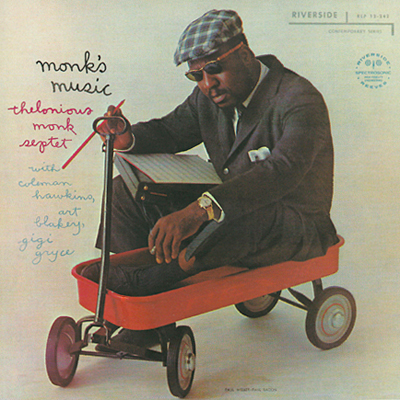 Monk’s Music is often cited as one of the focal points of Thelonious Monk’s six-year affiliation (1955-1961) with the Riverside label. Although the original disc clocked in at slightly over 30 minutes, packed into that half hour are not only the introduction of a few of Monk’s signature compositions, but also some amazing interactions from the assembled ensemble. Joining Thelonious Monk (piano) during these two recording sessions are Ray Copeland (trumpet), Gigi Gryce (alto sax), Coleman Hawkins (tenor sax), John Coltrane (tenor sax), Wilbur Ware (bass), and Art Blakey (drums). The true meaning of the album’s title exists beyond just Thelonious, as the opening sacred prelude, “Abide With Me,” was written by William H. Monk. This brief piece features only the horn quartet, foreshadowing their importance throughout the album. The angular stride style featured during the chorus of “Well You Needn’t” is tackled with the same nimble authority as Monk’s completely unfettered solos. If his ability to swing and his utilization of atomic clock accuracy have ever been questioned, the answer lies no further. So utterly free and fantastic, certain passages command immediate review to be fully comprehended. Hearing Coltrane and Hawkins together is admittedly part of the charm in these sides. “Ruby, My Dear” is bathed in the smoky essence of Hawkins’ rich textures and Coltrane’s playful cat-and-mouse aggression. Blakey gently propels the rhythm, never getting in the way and sporting a serene snare groove throughout. “Off Minor” is largely led by Monk, with solos that follow into and out of the memorable chorus that sparkles with the full involvement of the horn and rhythm sections. The same is true for this definitive version of “Epistrophy” — perhaps the zenith collaborative effort between Coltrane and Monk. Additionally, Blakey is in top form, with a solo that borders on spastic precision.