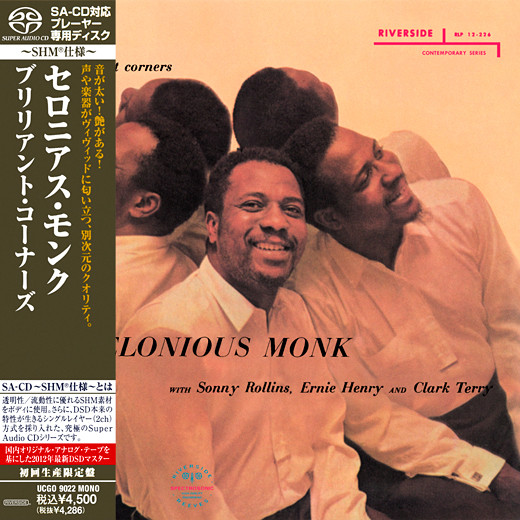 Although Brilliant Corners is Thelonious Monk’s third disc for Riverside, it’s the first on the label to weigh in with such heavy original material. Enthusiasts who become jaded to the idiosyncratic nature of Monk’s playing or his practically arithmetical chord progressions should occasionally revisit Brilliant Corners. There is an inescapable freshness and vitality saturated into every measure of every song. The passage of time makes it all the more difficult to imagine any other musicians bearing the capacity to support Monk with such ironic precision. The assembled quartet for the lion’s share of the sessions included Max Roach (percussion), Sonny Rollins (tenor sax), Oscar Pettiford (bass), and Ernie Henry (alto sax). Although a compromise, the selection of Miles Davis’ bassist, Paul Chambers, and Clark Terry (trumpet) on “Bemsha Swing” reveals what might be considered an accident of ecstasy, as they provide a timeless balance between support and being able to further the cause musically. Likewise, Roach’s timpani interjections supply an off-balanced sonic surrealism while progressing the rhythm in and out of the holes provided by Monk’s jackrabbit leads. It’s easy to write Monk’s ferocity and Forrest Gump-esque ingenuity off as gimmick or quirkiness. What cannot be dismissed is Monk’s ability to translate emotions into the language of music, as in the freedom and abandon he allows through Sonny Rollins’ and Max Roach’s mesmerizing solos in “Brilliant Corners.” The childlike innocence evoked by Monk’s incorporation of the celeste during the achingly beautiful ode “Pannonica” raises the emotional bar several degrees. Perhaps more pointed, however, is the impassioned “I Surrender, Dear” — the only solo performance on the album. Brilliant Corners may well be considered the alpha and omega of post-World War II American jazz. No serious jazz collection should be without it.