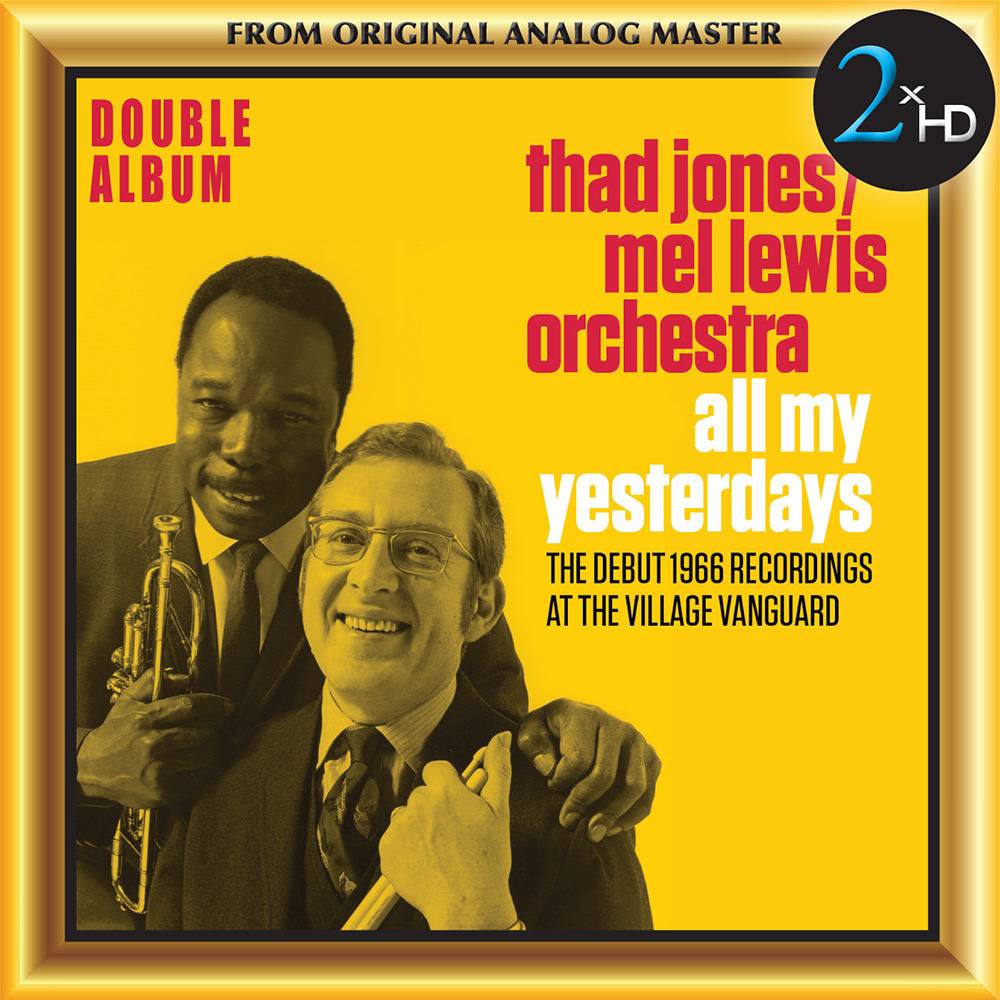 This double album marks the first official release of recordings capturing the Thad Jones/Mel Lewis Orchestra in concert at the legendary Village Vanguard in New York City in early 1966. The treasure trove of previously unheard live performances from two shows six weeks apart is presented in ahead-of-its-time audiophile quality. George Klabin, a 19-year-old engineer, taped the orchestra direct to two-track, mixing each of the soloists live on the fly. For this package, Klabin transferred and remastered the audio using the original tapes.

This deluxe 2-CD set also includes recordings from March 21, 1966, many of which have never been released before (although some of the recordings were unofficially exploited via a limited bootleg in 2000), and comes with an expansive 92-page book providing rare, previously unpublished photos, historic essays, interviews and memoirs. Contributors include executive producer George Klabin who recorded the original tapes, producer Zev Feldman, associate producer Chris Smith (author of The View from the Back of the Band: The Life and Music of Mel Lewis), longtime Vanguard Jazz Orchestra arranger and pianist Jim McNeely, and trombonist/educator John Mosca. All of the living musicians who played on these recordings contributed to the notes, recounting their personal experiences of the Thad Jones/ Mel Lewis Orchestra. Included are accounts from saxophonists Jerry Dodgion, Eddie Daniels and Marv “Doc” Holladay, trumpeter Jimmy Owens, trombonists Garnett Brown and Tom Macintosh, along with bassist Richard Davis.

A thrilling, thoughtfully curated two-disc collection, Resonance Records’ All My Yesterdays presents the debut 1964 performances of the innovative Thad Jones/Mel Lewis Orchestra. Recorded by Resonance Records founder George Klabin, then a 19-year-old college sophomore, jazz radio DJ, and budding sound engineer at Columbia University, these recordings showcase the band in two uproariously received performances at the legendary Village Vanguard, their home for 50 years and counting. Initially intended as a way to attract a record deal for the band, the tracks have remained largely unheard by the general public. Here, they are presented in full with a detailed liner-notes booklet featuring pictures, essays, and interviews with Klabin and others. Recorded by Klabin alone, using minimal equipment by modern standards, with only the musicians themselves to help move microphones as needed, the recordings sound remarkably clear and capture the electric atmosphere of the band’s debut. Highlighted by Jones’ bop-oriented trumpet solos and grounded by Lewis’ rhythm section featuring pianist Hank Jones, guitarist Sam Herman, and bassist Richard Davis, the orchestra was a lithe, forward-thinking yet always swinging entity that helped move large ensembles into the post-bop era. It also didn’t hurt that the band was populated with a cross-generational cadre of virtuoso musicians including saxophonists Joe Farrell, Pepper Adams and Eddie Daniels; trumpeters Jimmy Owens and Snooky Young; trombonist Bob Brookmeyer; and others. All of this is quite evident on these recordings, which put you front and center at the Village Vanguard on February 7, 1966 as saxophonist Jerry Dodgion soulfully leads the band into an explosive version of Jones’ swinging, gospel-inflected blues “Back Bone.” From that moment onward the band rarely lets up, with Lewis driving the arrangements with his roiling, foot-tapping pulse and Jones calling out solos and improvised background phrases. The second disc of music, recorded March 21, 1966, features an equally captivating performance from the band and a longer set list, including dynamic versions of “Low Down,” “Ah, That’s Freedom,” “Mean What You Say,” and more. While the Thad Jones/Mel Lewis Orchestra has an extensive oeuvre of recorded music to enjoy, All My Yesterdays captures the band at its brilliant, joyous start.

Put on a pair of good stereo headphones and immerse yourself in the atmosphere of those two nights. You will hear all the subtleties: Thad’s shouts, the room sound, the musicians’ camaraderie, encouraging each other and most of all the pure joy! Now you can be there, too.
– George Klabin, executive producer/original engineer

This album is a high-resolution digital transfer of material originating from an analogue recording. It may contain noise, distortion or other artifacts, and may also contain audio which is limited in bandwidth and dynamic range, due to the technology available at the time of its original creation. As such, it is offered as a high-resolution documentation of a historical release.
For the 2xHD transfer of this recording, the original 1/4”, 15 ips NAB master tape was played on a Nagra-T modified with high end tube playback electronics, wired with OCC silver cable from the playback head direct to a Telefunken EF806 tube. The Nagra T has one of the best transports ever made, having four direct drive motors, two pinch rollers and a tape tension head.