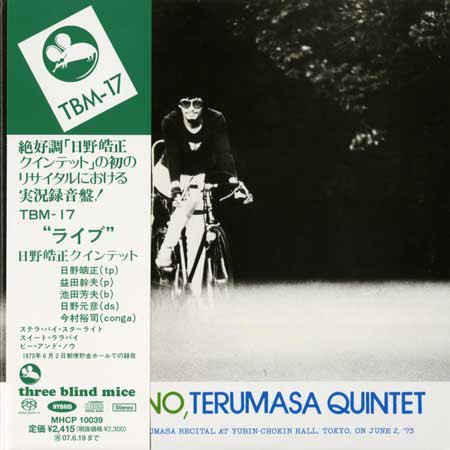 Born in 1942, trumpeter Terumasa Hino has been the leader of Japanese jazz for many decades, and one of the most internationally recognized among Japanese jazz musicians. His technique is amazing and his lyrical and emotional performance is something to behold. Recorded live in concert at Tokyo Yubin Chokin Hall on June 2, 1973, Hino and his quintet clearly showed that they were steeped in the “free” mode of operation, but their performance is engaging and does not leave the audience behind. Wild and unpredictable improvisations coexist with lyrical and rhythmic playing. A brilliant performance with many instances of amazing interplay.

One of the boldest and most powerful 70s albums we’ve heard from trumpeter Terumasa Hino – a live date that rivals the sharp edges and strong lines of his similar album for Enja at the time! The tracks here are all quite long, and mostly show a freely exploratory Hino – one who’s far more experimental than the smoother artist that emerged later in his electric years – and a player with a tremendous range of sounds on the trumpet! Other players include Mikio Masuda on piano and Motohiko Hino on drums – and the album features 2 long tracks that go quite outside, “Stella By Starlight” and “Be & Know” – plus a more lyrical version of “Sweet Lullaby”.