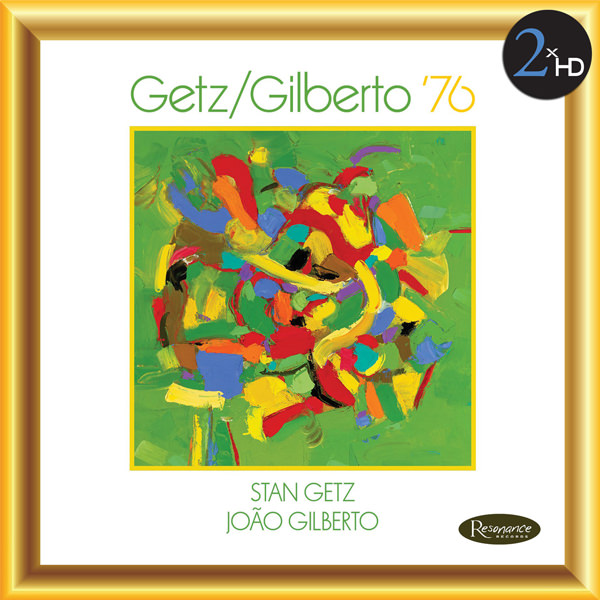 Getz/Gilberto ’76 is an instant classic collection of never-before-released recordings captured May 11-16, 1976 at the legendary San Francisco jazz club Keystone Korner, showcasing the legendary Brazilian singer, guitarist and composer João Gilberto, accompanied by the saxophone icon Stan Getz and his rhythm section of pianist Joanne Brackeen, bassist Clint Houston and drummer Billy Hart. These recordings were made during João Gilberto’s and Stan Getz’s weeklong engagement at the Keystone, which took place nearly 12 years after the release of their initial award-winning album.

The first Getz/Gilberto album sold over one million copies and almost single-handedly launched the bossa nova craze in America and around the world. It’s been said that the hit single off that album, “The Girl From Ipanema,” is the second most recorded song of all time, behind only “Yesterday” by the Beatles. The 1976 Keystone engagement represents one of the very few times this famed duo reunited after their initial creative collaboration in 1962, and according to the club’s founder and owner Todd Barkan, this engagement was João Gilberto’s first public performance after a four year hiatus

Back in 2012, George Klabin and I assumed the guise of a couple of jazz loving Indiana Jones – type archeologists when we decided to take an adventure: we were going to go after the crown jewels of a riveting tape collection amassed by Todd Barkan, the legendary jazz impresario and owner of San Francisco’s iconic jazz club, Keystone Komer. Our adventure would take us deep into a treasure trove of live recordings made at the Keystone by the artists who played there.

Having reunited for 1976’s The Best of Two Worlds, saxophonist Stan Getz and Brazilian singer/guitarist João Gilberto celebrated the album’s release with a week of shows at San Francisco’s Keystone Corner. Marking over a decade since the pair had made history with 1964’s landmark Getz/Gilberto album, the shows, which took place between May 11-16, 1976, would prove one of the rare times they appeared live together. Resonance Records’ 2016 album, Getz/Gilberto ’76 (and the separate release Moments in Time), documents these shows via live recordings made by Keystone Korner club owner Todd Barkan. Produced by Barkan and Resonance’s Zev Feldman, Getz/Gilberto ’76 is a superb package featuring not only some of Getz and Gilberto’s best live performances of the period, but also liner notes from Feldman, Barkan, and others, as well as interviews with bandmembers like drummer Billy Hart and pianist Joanne Brackeen. The ’70s were a fruitful time for Getz, a star of the cool jazz scene who had been playing professionally since the ’40s. While he achieved fame and wealth with his innovative bossa nova albums during the ’60s, he remained creatively hungry as the years wore on, surrounding himself with young, forward-thinking jazz musicians like Hart, Brackeen, and bassist Clint Houston, who also appears here. Despite this contemporary attitude, Getz and his band were more than amenable to backing the enigmatic Gilberto, who appears here in a variety of settings, from solo to duo to accompaniment by the full band. What’s particularly fascinating is hearing how the band adjusts to Gilberto’s distinctive and subtle phrasing, his steady guitar pulse anchoring his delicate, fluid vocal melodies. While cuts like “Chega de Saudade” and “Doralice” retain all the warmth and beauty of the original 1964 recordings, at the Keystone Getz and his band color them in surprising yet still thoughtful ways. The result is an evening of organic, dreamlike splendor. –AllMusic Review by Matt Collar