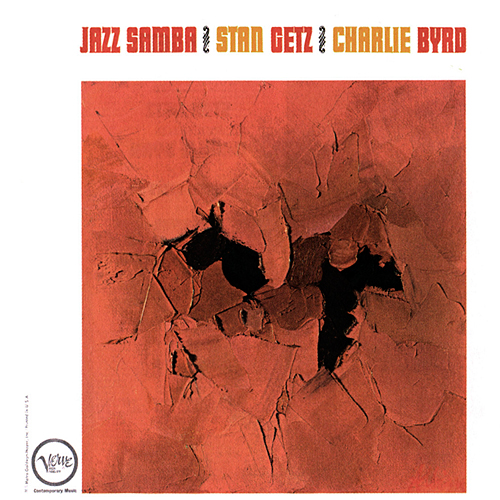 Credited for inspiring the bossa nova of the early 1960s, this recording by Stan Getz and Charlie Byrd was the first in a long series of South American-influenced American music. The album features two tracks by Brazilian composer Antonio Carlos Jobim, works by other Brazilian composers, and compositions by famed guitarist Charlie Byrd. Jazz Samba won the 1963 Grammy for Best Jazz Performance.

Partly because of its Brazilian collaborators and partly because of “The Girl From Ipanema,” Getz/Gilberto is nearly always acknowledged as the Stan Getz bossa nova LP. But Jazz Samba is just as crucial and groundbreaking; after all, it came first, and in fact was the first full-fledged bossa nova album ever recorded by American jazz musicians. And it was just as commercially successful, topping the LP charts and producing its own pop chart hit single in “Desafinado.” It was the true beginning of the bossa nova craze, and introduced several standards of the genre (including Ary Barroso’s “Bahia” and Antonio Carlos Jobim’s “Desafinado” and “Samba de Uma Nota Só” [aka “One Note Samba”]). But above all, Jazz Samba stands on its own artistic merit as a shimmering, graceful collection that’s as subtly advanced – in harmony and rhythm – as it is beautiful. Getz and his co-billed partner, guitarist Charlie Byrd – who was actually responsible for bringing bossa nova records to the U.S. and introducing Getz to the style – have the perfect touch for bossa nova’s delicate, airy texture. For his part, Byrd was one of the first American musicians to master bossa nova’s difficult, bubbling syncopations, and his solos are light and lilting. Meanwhile, Getz’s playing is superb, simultaneously offering a warm, full tone and a cool control of dynamics; plus, Byrd’s gently off-kilter harmonies seem to stimulate Getz’s melodic inventiveness even more than usual. But beyond technique, Getz intuitively understands the romanticism and the undercurrent of melancholy inherent in the music, and that’s what really made Jazz Samba such a revelatory classic. Absolutely essential for any jazz collection.