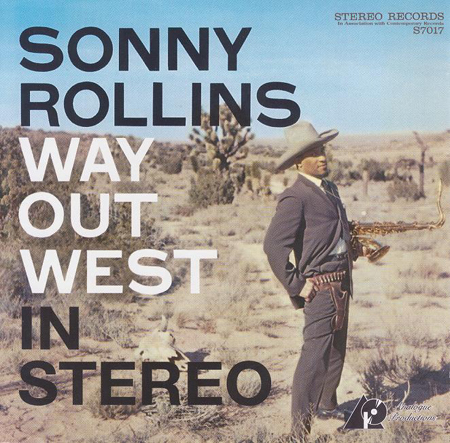 This was the first trio album that Sonny Rollins recorded in the late 50s, and it remains among the most important documents of his career. Astounding melodic continuity paired with stream-of-consciousness invention, passion, and maturity on the ballads “Solitude” and “There Is No Greater Love,” a brilliantly quirky title track, inspired support from Ray Brown and Shelly Manne, and a supreme wit that carried over to perhaps the greatest cover photo of all time combine to make Way Out West one of the most inspired and best loved albums in jazz history.

The timeless Way out West established Sonny Rollins as jazz’s top tenor saxophonist (at least until John Coltrane surpassed him the following year). Joined by bassist Ray Brown and drummer Shelly Manne, Rollins is heard at one of his peaks on such pieces as “I’m an Old Cowhand (From the Rio Grande),” his own “Way out West,” “There Is No Greater Love,” and “Come, Gone” (a fast stomp based on “After You’ve Gone”). The William Claxton photo of Rollins wearing Western gear (and holding his tenor) in the desert is also a classic. [The Contemporary re-release appends three bonus tracks, all of them alternate takes].

About the Mastering:
This music was recorded using only vacuum-tube components. As this is the primary reason the sound is so lush and natural, Doug Sax mastered this recording from the original analog tapes using the Mastering Lab’s proprietary all-tube electronics until the final digital conversion. Sax used the latest third-generation Analog-to-DSD converters by Ed Meitner/EMM Labs to transfer the music to the SACD layer.