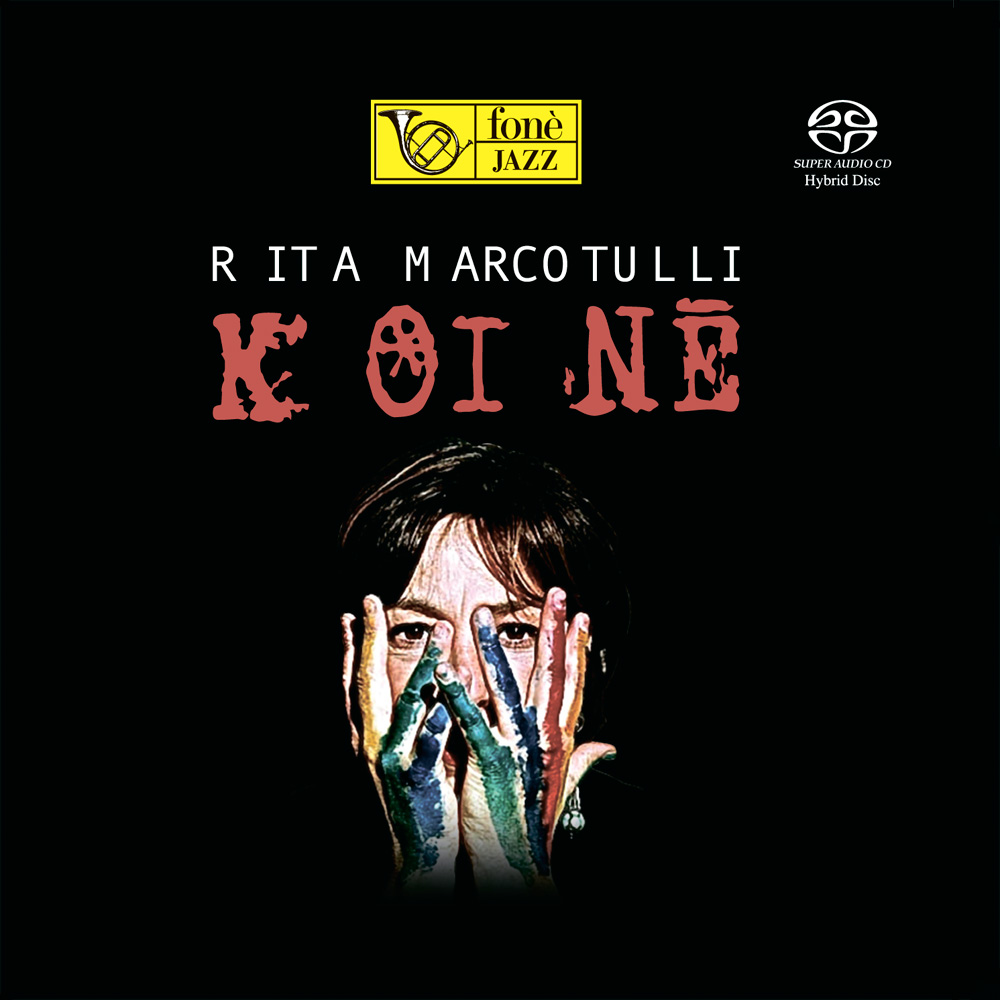 Koinè is Rita Marcotulli’s second DSD reissue release following her earlier album The Light Side of the Moon which features a track made famous by Pink Floyd. Marcotullo is a Jazz singer, pianist, and composer who always has a thread that connects her albums. Which explains why this album shares the title song (Koinè) with her prior album along with 10 more of her original compositions.

Rita Marcotulli is a star of the European jazz scene, and she marvelously acquits herself on this, her second disc to achieve release in the States. I haven’t heard her first, “Woman Next Door,” but on the strength of this incredible disc, I’ll be picking it up first chance I get. I do remember her on another disc I have, but I can’t seem to bring it to mind; however, her brilliant pianisms made such an impression that when I saw this disc at a local record store, I snapped it up.
Eclectism reigns here: there’s everything from Afrocentric chant (“Afromenian,” featuring that Eastern European madman, Arto Tuncboyaciyan, who’s mere mention on the credits seriously temps me to snatch up anything he’s on), to delicate (albeit electronically tweaked) chamber jazz (“Interference,” incorporating ephemeral vocals by Anja Garbarek [Jan’s wife?]) and all that lies between. The centerpiece is certainly “Il Richiamo,” 8 and 1/2 mintues of pure mystery graced by the unearthly vocals (and violin playing) of Lena Willemark, Javier Girotto’s pipe flute, and some very attractive piano figures from Marcotulli. Ethereal, sad, Northern folk-jazz–that’s what we’ve got here. Very evocative. But then–halfway through the mood radically changes into that sunny Scandinavian fiddle music. Were at some ur-Nordic fair, watching the flaxen-haired maidens swirl and cavort to millenia-old folk dances. And, finally, the music shifts again, and we’re in a primordial forest–Peer Gynt-land–surrounded by the spirits of mysterious beasts and creatures. It’s all impossibly evocative, one of the more distinguished performances of world-jazz I’ve ever encountered. “Numeri” has a very attractive Cyro Baptista circa Vira Loucos vibe, although even more sinister and mannered thanks to Gianmaria Testa’s vocals and exquisite sax stylings by Andy Sheppard, a hugely underrated player. Throughout there are nearly sublimineal electronic effects, courtesy of Metaxu(?), which add subtle exoticism and coloration to the procedings. They’re especially effective on the title cut, where harpsichord-like voicings add a Medieval feel to a mysterious Southern European vibe. This disc ranks at the very pinnacle of transcendent world jazz, right up there with such astounding discs as Nacer by Peter Epstein and Safa. With its exotic Mediterrian aesthetic, its beguiling electronic backgrounds, its perfectly imagined and realized piano concepts, it is perhaps even more magical than these transcendent recordings. Sure to be a staple in my disc player for years to come. – customer review at amazon-com