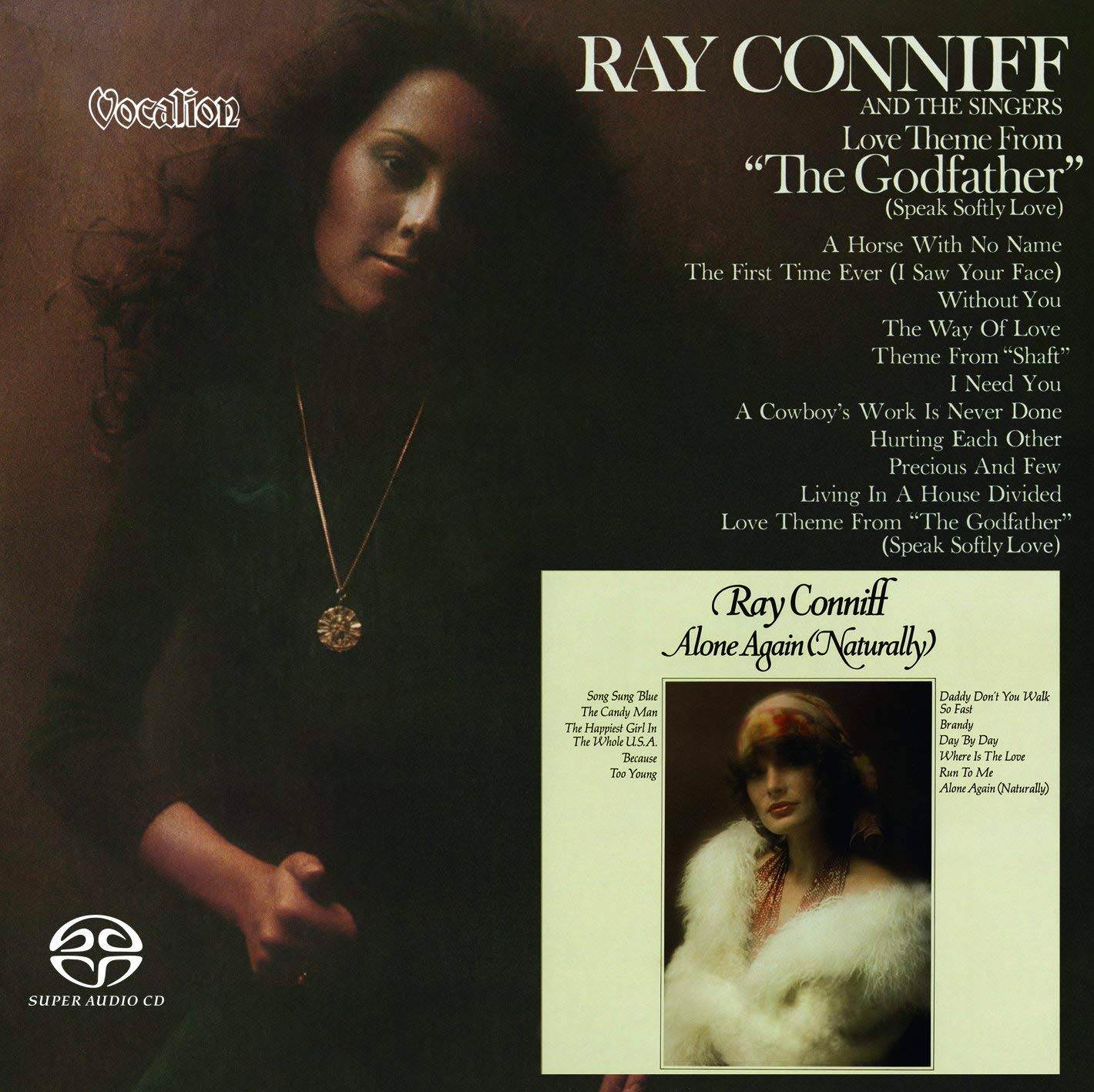 A pair of groovy albums from Ray Conniff – both with a wonderful 70s vibe! “Alone Again Naturally” takes its title from the leadoff version of the great Gilbert O’Sullivan tune – and Ray conducts his group with a surprisingly bouncy vibe at times – mostly a sing-song mode that has the voices of the Conniff Singers hitting all their best bright modes. “Theme From The Godfather” has Ray Conniff taking on a host of mellow tunes from the mid 70s – mixing his full arrangements with a few electric touches, and really using the Ray Conniff Singers to their best effect! The whole thing has that subtle sensual quality that easy listening was hitting during the sexual revolution – quite a change from the Conniff groove of a generation before, and one that seems an even better fit for the vocals.

Like many easy listening and adult pop musicians, Ray Conniff turned toward modern pop and rock songwriters in the early ’70s in an effort to stay contemporary, which is not necessarily the same thing as getting hip – although that may have been part of the plan, as well. In any case, Conniff tackled such current hits as “Hurting Each Other,” “A Horse With No Name,” and “Without You,” as well as such songwriters as Sonny Bono, on his 1972 album Love Theme from “The Godfather”, treating them to arrangements that had grown familiar to any fan of Conniff or easy listening in the ’70s. Conniff had backed away from the more interesting tricks and turns of his work a decade earlier, and had settled into sweet, syrupy orchestral arrangements graced by airy, relentlessly sunny harmony vocals pulled from a Mitch Miller album. For the most part, this results in music that is so middle-of-the-road it rarely registers outside of background music, and it glides by nicely at that level. Of course, a record like this is primarily of interest to latter-day listeners anxious to discover a new piece of kitsch, and while a quick scan of the songs suggests that this would be great kitsch, it’s entirely too MOR to be worth a chuckle, outside of a take on “Theme from ‘Shaft’” that is so ridiculous, it feels like Conniff and crew were in on the joke – after all, who could sing a line “who’s the black private dick who’s a sex machine to all the crazy chicks?” without realizing it was silly? That may bring a smile to your face, but the rest of the album is quite forgettable, as is its follow-up, Alone Again (Naturally). The third of Ray Conniff’s three albums of contemporary pop hits in 1972, Alone Again (Naturally) is the one that feels most like contemporary AM Pop from the early ’70s, partially because Conniff spices up his arrangements a little and partially because there’s a wider variety of styles on this album, from Gilbert O’Sullivan’s deceptively catchy title song, to Donna Fargo’s country-pop “The Happiest Girl in the Whole USA”; Anthony Newley’s show-stopping kitsch “The Candy Man,” and Looking Glass’ quintessential “Brandy (You’re a Fine Girl).” Since there’s more variety here than there was on the preceding Love Theme from “The Godfather”, Conniff has the opportunity to write some more interesting arrangements – the spare electric guitar opening of “Song Sung Blue,” the punctuating horns on “Where Is the Love” – which makes this a more engaging listen than its predecessor. Nevertheless, this album, like the last, is firmly entrenched in MOR easy listening, designed to be background listening and succeeding at that. And that means that those listeners looking for a campy piece of kitsch will be sorely disappointed – Conniff and crew never take enough chances to do something truly, memorably silly here, and it all glides by without making much of an impression. As period background music, it isn’t bad, but neither is it particularly good, and outside of a quick dose of nostalgia, there isn’t much of a reason to listen to it now. It’s a period piece, nothing more, nothing less.