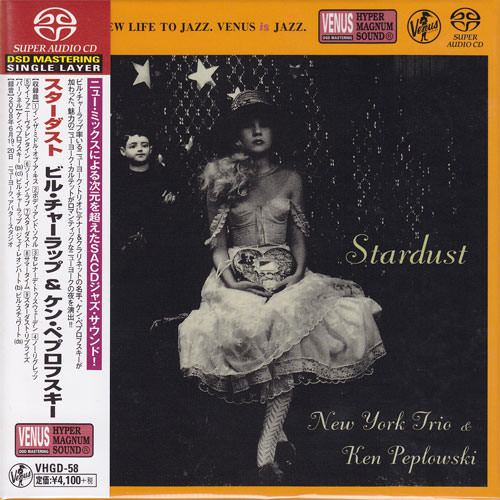 A wonderful gift for jazz fans has arrived from Venus Records! Nobody argues that Bill Charlap is one of the most preeminent jazz pianists of his generation. His encyclopedic knowledge of the American Songbook is second to none, and his beautiful touch, amazing skills and imagination make it a pleasure to listen to him at all times. Ken Peplowski, on the other hand, is without a doubt one of the best clarinet and tenor sax players in the swing tradition. Each of them had recorded a number of albums for Venus Records of Japan separately–Charlap with his great New York Trio (with Jay Leonhart and Bill Stewart) and Peplowski with his own quartet and the Eddie Higgins Quintet. Now, wouldn’t it be nice to put them together in a studio and make an album? Yes, it would, and they actually did it! They are a match made in heaven, and you can hear from the first note of the first song that they are inspired. Peplowski’s supple, rich, and lyrical clarinet and tenor sax playing is simply beautiful, and Charlap’s quietly intense solos are awe-inspiring. Leonhart and Stewart are also given ample room to stretch out and impress, as many of the tunes go over seven minutes. An instant classic and great for fans of straight ahead jazz!