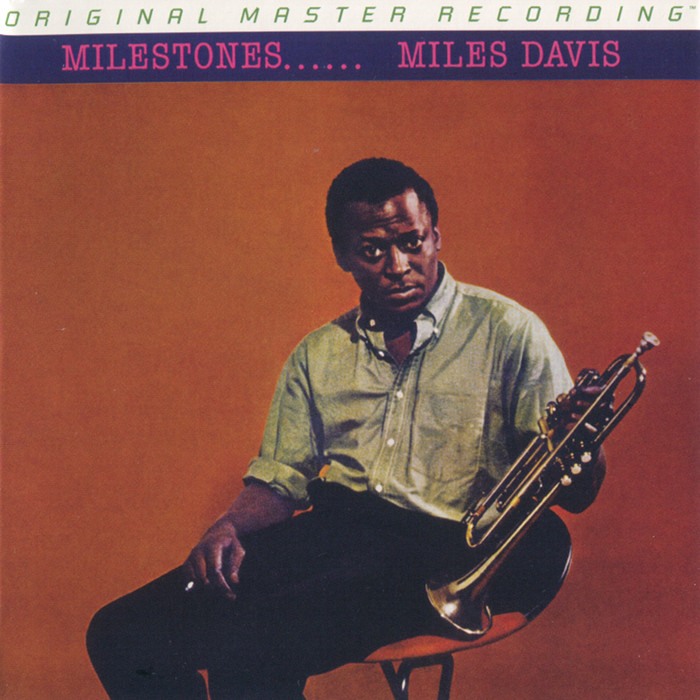 What is immediately noticeable upon listening to this delicately and superbly remastered version of Miles Davis classic first — and only — album with his original sextet is how deep the blues presence is on it. Though it is true that the album’s title cut is rightfully credited with introducing modalism into jazz, and defining Davis’ music for years to come, it is the sole selection of its kind on the record. The rest is all blues in any flavor you wish you call your own. For starters, there’s the steaming bebop blues of “Dr. Jackie” — recorded in 1955 for a Prestige session with Jackie McLean. Davis is still in his role as a trumpet master, showing a muscularity of tone that reveals something more akin to Roy Eldridge or Louis Armstrong than Dizzy or Fats Navarro. The tempo is furious as all the members of the sextet solo except for Jones. The saxophonists trade choruses and come off sounding like mirrored images of one another in the slower, post-bop blues that is “Sid’s Ahead.” With a slippery melody line that quotes two harmonic lines from early New Orleans-styled blues, Davis drives the band into the rhythm section’s garage. It’s Coltrane first with his stuttered, angular lines, hiccuping halfway through the interval before continuing on with a squeak here and the slightest squawk there. Next up is Davis, blowing fluid and straightened lines, ribbons through the rhythm section’s center as Red Garland lays out and leaves it to Paul Chambers and Philly Joe Jones to provide the earnest, time-keeping 4/4 that Davis sidles to in the tune. When Adderley solos, all best are off as he plays as pure a blues as he was capable at the time. Nonetheless, there are the long lines of slurred notes, smattered against Garland’s harmonies and he slips into quoting “Skip to my Lou” before knotting it back down to the basics and even then not for long. Coltrane was already exploring the edges of mode and harmony; he used an intervallic invention in the choruses to juxtapose his solo against the rhythm section and it worked — but it must have made Davis raise an eyebrow. Chambers’ solo is as tasteful and as breezy and free as only he could be. His contrapuntal soloing rides the rhythm out, Garland striding along quietly until the tune returns.

“Sid’s Ahead” is followed by the track “Two Bass Hit,” written by Dizzy and John Lewis. It’s an off-kilter blues with a wide middle section, no doubt for Lewis’ piano to fill. It’s a wonderful ensemble showcase but Davis blows his ass off in his solo, riding through the two saxophonists and challenging them at the same time. But then comes “Milestones” with its modal round and interval, where harmony is constructed from the center up. It is a memorable tune for not only its structure and how it would inform not only Davis’ own music, but jazz in general for the next seven years. It would also change John Coltrane’s life. The exploratory style of soloing was already revealing itself in Trane’s playing, but he loosens it up even more here. More importantly, this is the first place we get to see it in Davis, where there is no goal at the end of the rainbow, there is merely the solo itself in the heart of the mode. The alternate take of this tune, which is featured at the end of the album, tagged on with two others of “Two Bass Hit” and “Straight, No Chaser,” has an even longer and weirder solo by Davis where he plays notes he probably never played again. The album’s closer is Monk’s “Straight, No Chaser,” which became a signature tune for the sextet even when Garland and Jones left to be replaced by Bill Evans and Jimmy Cobb and later Evans by Wynton Kelly. Like “My Funny Valentine,” it was a Davis staple that accented how intuitive the band was with unusual harmonic structures like Monk’s. The Adderley solo is remarkable for its fluid, bebop-style runs over Garland’s extended chords and flatted sevenths. Cannonball quotes the melody in a myriad of ways and goes off the deep end each time he does, taking the new rendition to its limit, always returning it to the blues root. Davis plays it cool, slithering around the rhythm section staying firmly in blues phraseology, even quoting a reverse harmonic melodic read of “When the Saints Go Marching In,” bringing it in and out three times while pushing the blues line to its edge. Coltrane’s solo is all over the place, slurring notes as he plays weird scales all over the blues and triple times the rhythm section. But he knows the tune better than anyone here — he spent six months with Monk just previous to this playing it every night. Coltrane knows how much he can stretch the intervals without breaking apart the body. He inserts his own modal interpretation on the blues halfway through his solo before slipping into the straight, swinging groove of his Blue Train album, finished only two months before. Garland, oddly enough, is the one to travel the furthest from Monk here, coming off with a Bud Powell-esque blues muscle that shifts the entire tune into a straight bebop blues before sifting in a few Errol Garland quotes as the bass solos and then the front line comes in to take it out. The alternate take is even stranger as Garland falters in his time not once but twice and has to find his way back in.