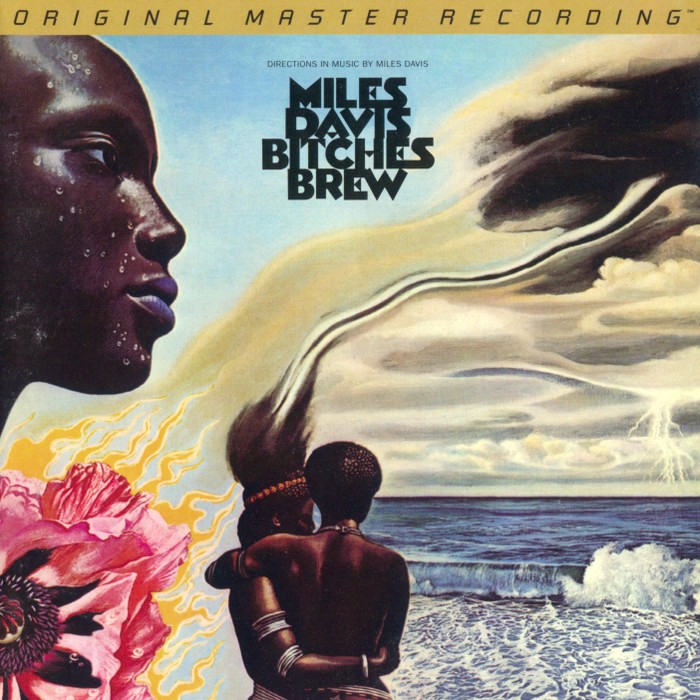 Bitches Brew is a studio double album by American jazz musician Miles Davis, released on March 30, 1970, on Columbia Records. The album continued his experimentation with electric instruments previously featured on his critically acclaimed In a Silent Way album. With the use of these instruments, such as the electric piano and guitar, Davis rejected traditional jazz rhythms in favor of a looser, rock-influenced improvisational style. Bitches Brew was Davis’s first gold record; it sold more than half a million copies. Upon release, it received a mixed response, due to the album’s unconventional style and experimental sound. Later, Bitches Brew gained recognition as one of jazz’s greatest albums and a progenitor of the jazz rock genre, as well as a major influence on rock and funk musicians. The album won a Grammy Award for Best Large Jazz Ensemble Album in 1971.

Thought by many to be among the most revolutionary albums in jazz history, Miles Davis’ Bitches Brew solidified the genre known as jazz-rock fusion. The original double LP included only six cuts and featured up to 12 musicians at any given time, some of whom were already established while others would become high-profile players later, Joe Zawinul, Wayne Shorter, Airto, John McLaughlin, Chick Corea, Jack DeJohnette, Dave Holland, Don Alias, Bennie Maupin, Larry Young, and Lenny White among them. Originally thought to be a series of long jams locked into grooves around keyboard, bass, or guitar vamps, Bitches Brew is actually a recording that producer Teo Macero assembled from various jams and takes by razor blade, splice to splice, section to section. “Pharaoh’s Dance” opens the set with its slippery trumpet lines, McLaughlin’s snaky guitar figures skirting the edge of the rhythm section and Don Alias’ conga slipping through the middle. Corea and Zawinul’s keyboards create a haunted, riffing modal groove, echoed and accented by the basses of Harvey Brooks and Holland. The title cut was originally composed as a five-part suite, though only three were used. Here the keyboards punch through the mix and big chords ring up distorted harmonics for Davis to solo rhythmically over, outside the mode. McLaughlin’s comping creates a vamp, and the bass and drums carry the rest. It’s a small taste of the deep voodoo funk to appear on Davis’ later records. Side three opens with McLaughlin and Davis trading fours and eights over a lockstep hypnotic vamp on “Spanish Key.” Zawinul’s lyric sensibility provides a near chorus for Corea to flit around in; the congas and drummers juxtapose themselves against the basslines. It nearly segues into the brief “John McLaughlin,” featuring an organ playing modes below arpeggiated blues guitar runs. The end of Bitches Brew, signified by the stellar “Miles Runs the Voodoo Down,” reflects the influence of Jimi Hendrix with its chunky, slipped chords and Davis playing a ghostly melody through the funkiness of the rhythm section. It seemingly dances, becoming increasingly more chaotic until it nearly disintegrates before shimmering into a loose foggy nadir. The disc closes with “Sanctuary,” completely redone here as a moody electric ballad that was reworked for this band while keeping enough of its integrity to be recognizable. Bitches Brew is so forward-thinking that it retains its freshness and mystery in the 21st century. ~~ AllMusic Review by Thom Jurek