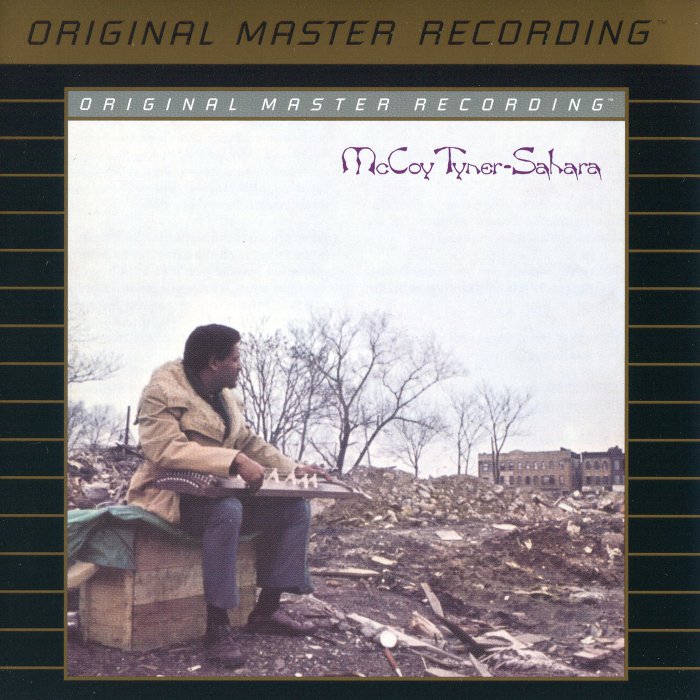 After the death of John Coltrane, his longtime pianist McCoy Tyner was in something of a musical quandary. Keeping up with his mentor through the incredible explorations of the early ’60s, he seemed to have some difficulty navigating the even further out territories explored in the two or three years before Coltrane’s death in 1967. His subsequent albums as a leader were solid, enjoyable efforts but seemed oddly retrograde, as though he needed time to settle back and re-digest the information handed down to him. With Sahara, Tyner found the precise perfect “middle ground” on which to stand, more structured than late Coltrane, but exploding with a ferocity and freedom of sound that made it simply one of the greatest jazz recordings of the decade. None of the other members of his quartet ever sounded so inspired, so liberated as they do here. Sonny Fortune threatens to tear the roof off the joint on more than one occasion, Calvin Hill is more than rock-solid on bass, his roots arcing deeply into the earth, and as for Alphonse Mouzon, well, no one familiar with his later vapid meanderings in fusion would begin to recognize him here, so incendiary is his playing. And Tyner develops so much pure energy, channeled with such pinpoint precision, that one worries about the physical stability of any piano under such an assault. From the extraordinarily intense “Ebony Queen” through the ruminative solo “A Prayer for My Family, the equally intense “Rebirth,” and the concluding, side-long title track, there’s not a misstep to be heard. “Sahara,” over the course of its 23 minutes, covers vast ground, echoing the majesty and misery of the geographical area with percussion and flute interludes to some of Tyner’s very best playing on record. Even something that could have resulted in a mere exercise in exotica, his koto performance on “Valley of Life,” exudes both charm and commitment to the form. Tyner would go on to create several fine albums in the mid-’70s, but never again would he scale quite these heights. Sahara is an astonishingly good record and belongs in every jazz fan’s collection.