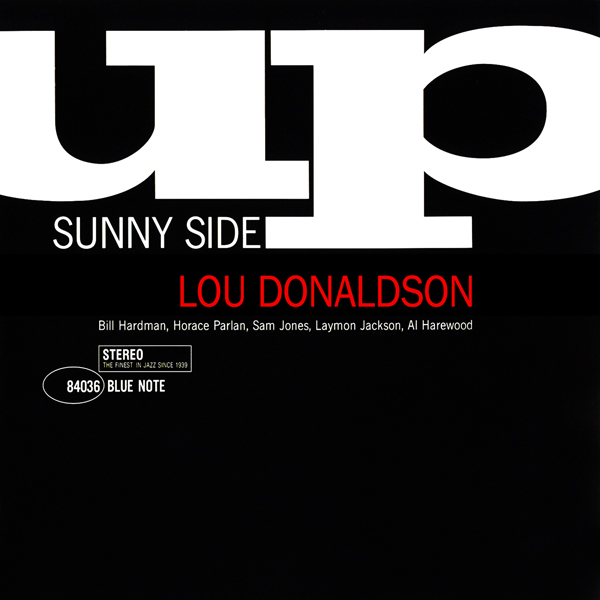 In the late 1950s and early 1960s, alto saxophonist Lou Donaldson recorded primarily either with his own quartet featuring pianist Herman Foster, or with organ trios. Occasionally, he’d change things up as he did on this 1960 session that was strictly a hard bop affair. Foster didn’t take part in this recording; Horace Parlan replaced him at the piano and has been singled out by critics for his breathtaking performance. There’s still plenty of funk in evidence on Goose Grease, but Hardman’s Politely, Softly As In A Morning Sunrise and The Man I Love find Donaldson digging deep into his bop roots. In addition to Donaldson and Parlan, the rest of the quintet on this album includes Bill Hardman on trumpet, Laymon Jackson and Sam Jones splitting bass duties and Al Harewood on drums.

Sunny Side Up is closer to hard bop than the straight-ahead bop that characterized Lou Donaldson’s ’50s Blue Note records. There’s a bit more soul to the songs here, which pianist Horace Parlan helps emphasize with his lightly swinging grooves. The pair help lead the group — which also features trumpeter Bill Hardman, drummer Al Harewood and bassist Sam Jones (Laymon Jackson plays bass on two of the eight songs) — through a mellow set of standards and bluesy originals from Donaldson and Parlan. Even the uptempo numbers sound relaxed, never fiery. Despite the general smoothness of the session, Donaldson stumbles a little — the quotation of “Flight of the Bumblebee” on “Blues for J.P.” is awkward, as is the snippet of “Pop Goes the Weasel” on “Politely,” and “Way Down Upon the Swanee River” sounds lazy — but there’s enough solid material to make Sunny Side Up a worthwhile listen for fans of Donaldson and early-’60s hard bop. –Stephen Thomas Erlewine