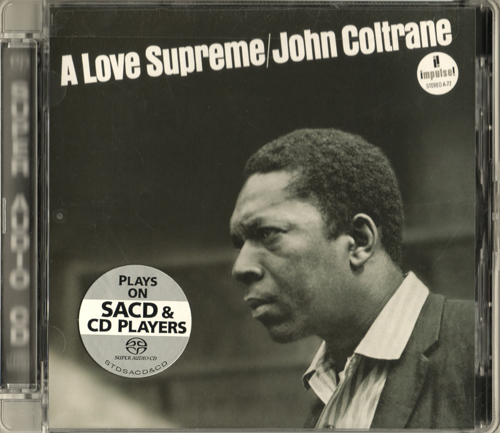 Easily one of the most important records ever made, John Coltrane’s A Love Supreme was his pinnacle studio outing that at once compiled all of his innovations from his past, spoke of his current deep spirituality, and also gave a glimpse into the next two and a half years (sadly, those would be his last). Recorded at the end of 1964, Trane’s classic quartet of Elvin Jones, McCoy Tyner, and Jimmy Garrison stepped into the studio and created one of the most thought-provoking, concise, and technically pleasing albums of their bountiful relationship (not to mention his best-selling to date). From the undulatory (and classic) bassline at the intro to the last breathy notes, Trane is at the peak of his logical yet emotionally varied soloing while the rest of the group is remarkably in tune with Coltrane’s spiritual vibe. Composed of four parts, each has a thematic progression leading to an understanding of spirituality through meditation. From the beginning, “Acknowledgement” is the awakening of sorts that trails off to the famous chanting of the theme at the end, which yields to the second act, “Resolution,” an amazingly beautiful piece about the fury of dedication to a new path of understanding. “Persuance” is a search for that understanding, and “Psalm” is the enlightenment. Although he is at times aggressive and atonal, this isn’t Trane at his most adventurous (pretty much everything recorded from here on out progressively becomes much more free, and live recordings from this period are extremely spirited), but it certainly is his best attempt at the realization of concept — as the spiritual journey is made amazingly clear. A Love Supreme clocks in at just over 30 minutes, but if it had been any longer it could have turned into a laborious listen. As it stands, just enough is conveyed. It is almost impossible to imagine a world without A Love Supreme having been made, and it is equally impossible to imagine any jazz collection without it.