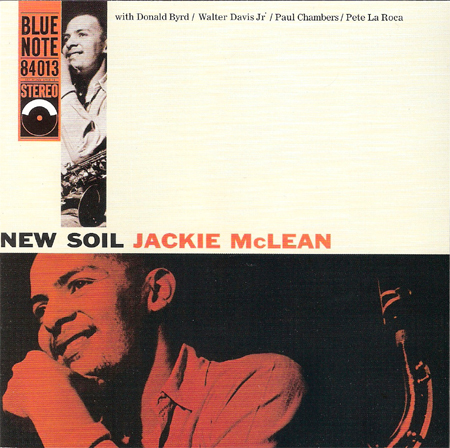 New Soil wasn’t the first session Jackie McLean recorded for Blue Note, but it was the first one released, and as the title suggests, the first glimmerings of McLean’s desire to push beyond the limits of bop are already apparent. They’re subtle, of course, and nowhere near as pronounced as they would be in just a few years’ time, but — as with the 1959 material later issued on Jackie’s Bag — hints of Ornette Coleman’s stream-of-consciousness melodic freedom are beginning to find their way into McLean’s improvisations. His playing is just a touch more angular than the ear expects, especially given the very bluesy nature of pieces like McLean’s 11-minute vamp, “Hip Strut,” and pianist Walter Davis, Jr.’s infectious boogie-woogie “Greasy.” Coleman’s influence is most apparent on McLean’s “Minor Apprehension,” where the freewheeling, Coleman-esque main theme is paralleled by trumpeter Donald Byrd in a definite nod to Don Cherry. What’s more, drummer Pete LaRoca takes a surprisingly free solo of significant length toward the end of the track. However, the cut that the musicians seem to dig into the most is Davis’ twisting, turning bopper “Davis Cup,” which sports a rhumba beat and a bevy of exciting solos. It could be argued that McLean never recorded a bad album for Blue Note, and New Soil got his career with the label off to a terrifically stimulating start.

Mastered for this SACD by Mastered by Kevin Gray & Steve Hoffman.