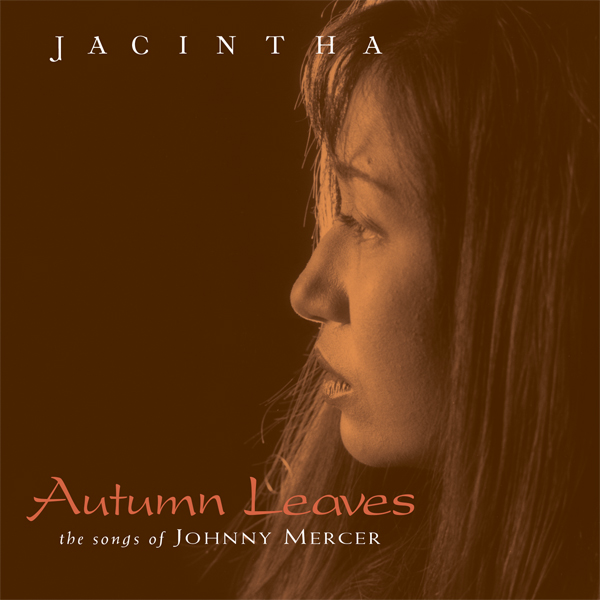 On Autumn Leaves Jacintha’s voice is warm, lush and sensual. Once again she delivers strong performances onsuch classics as the title track, “Moon River” and “Skylark.” The title track finds Jacintha singing in the original French intro and first verse as well as the later Johnny Mercer English lyrics. We weren’t the only ones impressed with Jacintha’s vocal prowess, she also caught the attention of Bordertown Pictures (Touchstone Pictures) and a team arrived during the recording session to capture a brand new version of the Grammy-award winning song “Here’s To Life,” which was used as the opening tune to the Antonio Banderas/Woody Harrelson movie “Play It To The Bone.” The soundtrack released by Hollywood Records also includes a second version of “Here’s To Life” with Artie Butler accompanying Jacintha on piano, included here as a bonus track. The album was recorded live direct to 2-track and is mastered using Sony’s Direct Stream Digital (DSD) process by Bernie Grundman in Hollywood to produce an album of true audiophile quality sound. Bonus Tracks: “Here’s to Life” (soundtrack mix).

Nine of the 11 tracks here are ballads. Their uncluttered arrangements spotlight Jacintha’s smooth and sensuous voice, while her expressive phrasing draws the most from the classic Johnny Mercer lyrics. Jacintha includes the original lyrics to “Autumn Leaves,” done in soft and flawless French; otherwise, her primary innovation is to deliver the tunes straight and sincerely, with minimal improvisation and maximum tenderness. There’s no trace of the customary bitterness in “One More for the Road,” and her unaccompanied reading of “Moon River” liberates that song from any prior goopy associations. In fact, her version brings out the poignancy of the lyrics so purely that her additional chorus, coming after a rather wandering piano interlude, seems redundant. The band is good but pretty restrained throughout, supplying subtle commentary and close support, then breaks out nicely on the two up-tempo tracks: “And the Angels Sing” and “Something’s Got to Give.” Jacintha’s measured, legato approach isn’t very conducive to swinging, but listening to “Skylark”and “Midnight Sun,” in particular, is like sipping cool champagne in a fragrant hot tub. Another highlight is the bonus track, “Here’s to Life,” a signature tune for Shirley Horn, which Jacintha takes at a slightly faster tempo. While it’s not a Mercer lyric, its beautiful sentiments and melody fit nicely into this relaxed and intimate set. Whatever this CD may lack in fire, it makes up for in warmth. –Judith Schlesinger, AllMusic

For her sixth album, Jacintha pays homage to songwriter Johnny Mercer. Her warm, clear, delicate approach to storytelling enables the vocalist to deliver each favorite song in a comfortable manner with intimacy and charm. From Singapore, Jacintha has also had experience as an actress, enabling her to put herself into each situation as appropriate. A small ensemble culled from L.A.’s finest jazz accompanists backs her.
Jacintha is at her best when incorporating her impeccable enunciation on “I Remember You” and when dipping into her rich lower vocal register for a loping arrangement of “Trav’lin’ Light.” Her acting experience shines through “Here’s To Life” with added dramatic feeling. A clarion trumpet blends appropriately to signal the album’s close. Jacintha’s supportive partners lend authenticity to the history behind each song. Teddy Edwards, who shares the microphone for half the album, provides fluid, blues-based phrases. Anthony Wilson and Kei Akagi lend more than harmony in their respective roles with different chording instruments. The guitarist provides a lovely “Skylark” interlude, while pianist Akagi lends spontaneity in duet format to the well-worn “Moon River.” While she’s not always convincing on slower ballads, Jacintha’s warm, fragile, sophisticated delivery makes for an honorable tribute and a recommended listening experience. –Jim Santella, All About Jazz