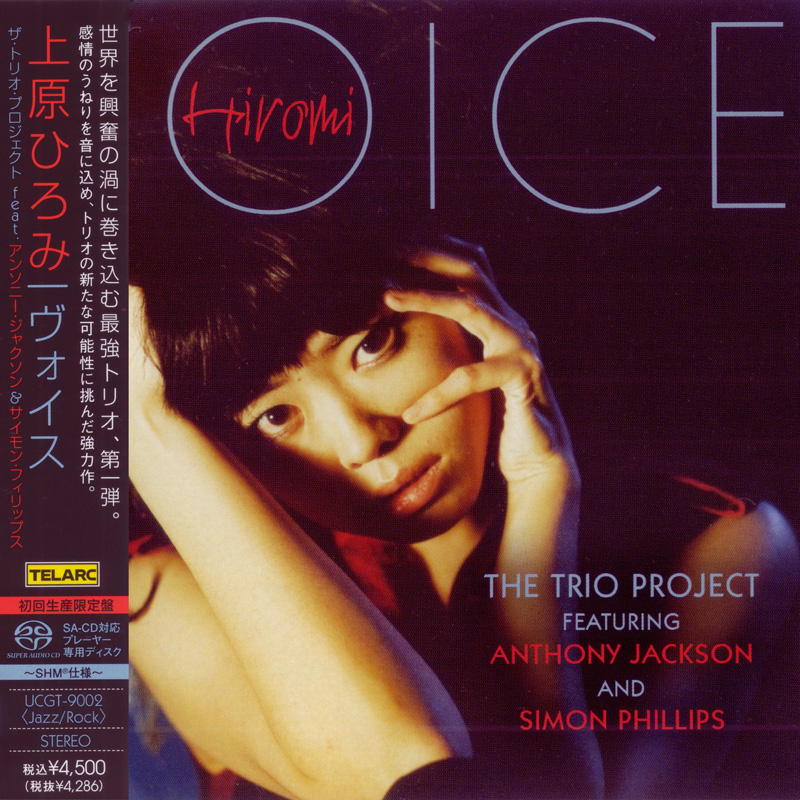 Pianist and composer Hiromi Uehara, whose passionate and incendiary keyboard work has been a shining light on the jazz landscape since her 2003 debut, believes that the voice that never speaks can sometimes be the most powerful of all. This recording, simply titled Voice, expresses a range of human emotions without the aid of a single lyric.

Although a mesmerizing instrumentalist in her own right, Hiromi enlists the aid of two equally formidable players for this project – bassist Anthony Jackson (Paul Simon, The O’Jays, Steely Dan, Chick Corea) and drummer Simon Phillips (Toto, The Who, Judas Priest, David Gilmour, Jack Bruce). Jackson had previously played on a couple tracks from each of Hiromi’s first two albums – Another Mind in 2003 and Brain in 2004 – but they had never recorded an entire album together. “I’ve always been a huge fan of his bass playing”, Hiromi says. “I’ve always liked playing with him, and I was very happy that we finally had the chance to make an entire album together”.

Some jazz musicians aren’t documented nearly as much as they should be; one could write a book about all the talented improvisers who made it to 60 or 65 without ever recording an album, or even being featured as a sideman on someone else’s album. But Hiromi, thankfully, has been recording frequently ever since she emerged in the early 2000s, and she has been wise enough to record in a variety of settings. Hiromi has recorded unaccompanied, as well as in duos and trios; she has played in both electric groups and acoustic groups, and she has provided straight-ahead post-bop as well as fusion. Voice is best described as an electro-acoustic effort that is more post-bop than fusion but has its rock-influenced moments. Forming a trio with Anthony Jackson on electric bass and Simon Phillips on drums, Hiromi is heard on both acoustic piano and electric keyboards but pays more attention to the former. And while this 2010 recording may not be ideal from the perspective of a rigid jazz purist or a bop snob, Hiromi’s outlook is very much the outlook of a jazz improviser; the fact that she, Jackson, and Phillips bring some rock muscle to some of the material doesn’t negate that. Hiromi is undeniably imaginative on an intriguing performance of Ludwig van Beethoven’s Piano Sonata No. 8 in C Minus, Opus 13, aka Sonata Pathétique, which goes back to 1798. Or course, there was no jazz in Beethoven’s time; if one agrees that jazz started when cornetist Buddy Bolden formed his first band in New Orleans in 1895, then jazz was a little over 100 years away from being created when Beethoven composed Sonata Pathétique. But Hiromi has no problem bringing Beethoven’s piece into the jazz world of the 21st century; she is no less an improviser on Sonata Pathétique than she is on free-spirited originals such as “Labyrinth,” “Flashback,” “Delusion,” and “Now or Never.” The Hiromi/Jackson/Phillips trio might display more rock muscle on some tracks than they do on others, but rock muscle or not, this 66-minute disc never loses its jazz mentality. Voice is yet another absorbing effort from this capricious acoustic pianist/electric keyboardist.