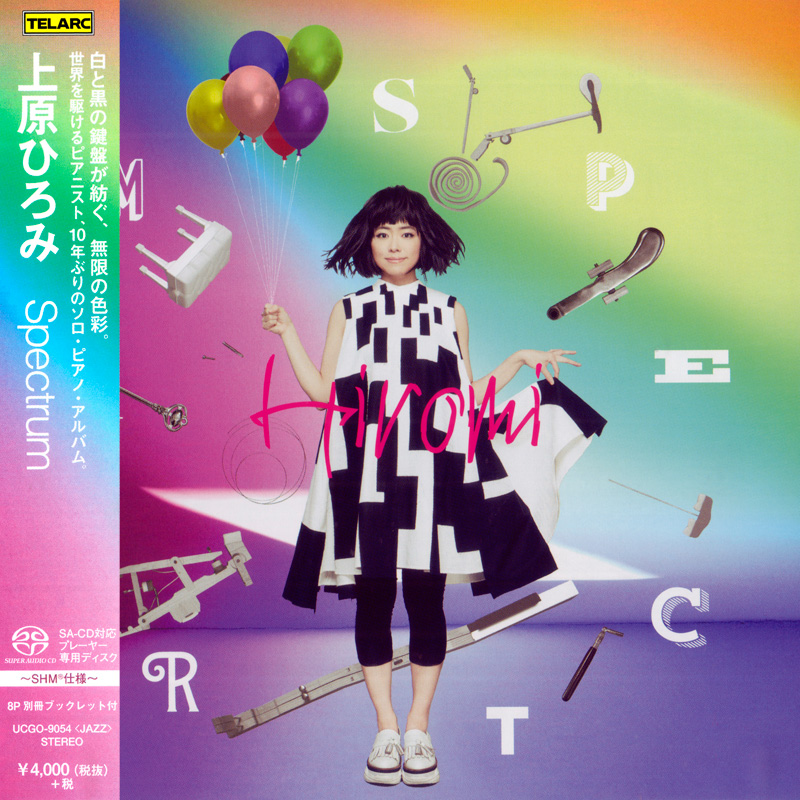 Spectrum is the eleventh studio album by Japanese jazz pianist Hiromi Uehara. Jon Regen of Keyboard Magazine said “Ten years after the release of her solo piano debut, Place to Be in 2009, Hiromi goes it alone once again on Spectrum. The album celebrates the maturity and depth that have enriched her music in recent years, during her collaborations with artists like Chick Corea, Stanley Clarke and Michel Camilo”.

Since making her recorded debut in the 1990s, Hiromi Uehara has established herself as one of the most gifted jazz pianists of her generation. She issued Spectrum on the eve of her fortieth birthday as an overview of what she learned as a musician in her thirties. It’s the second time she’s done this; her debut solo offering, Place to Be, in 2009 that surveyed her twenties. Hiromi conjures up the same power and creative facility solo as she does with her Trio Project (bassist Anthony Jackson and drummer Simon Phillips). Spectrum addresses a guiding notion imposed by her piano teacher: that she quite literally envision prismatic color through music.

Set-opener “Kaleidoscope” commences with a sequence of single notes played in an angular pattern that gives way to episodic multiples in staggered and syncopated sequences – a bit like Philip Glass’ piano cadences in Einstein on the Beach – and she adds and subtracts while layering fleet and forceful dynamics and spiraling arpeggios across, under, and atop her chordal syntax; they emerge, dissipate, and evolve into new ones throughout. You can hear everyone from Bach and Scarlatti to Art Tatum and Chick Corea in this workout. The physically demanding title track builds on a similar idea, although modal and contrapuntal acrobatics chase one another at high speeds with only expansive, chordal interludes offering respite, and then only briefly. But speed and dexterity aren’t the only things on offer. Her ballads, including “Whiteout,” offer an elegant lyricism that touches on Beethoven and Ravel as well as Scott Joplin and Errol Garner. It aches with emotion and the hint of a smile in its improvisational moments. “Yellow Wurlitzer Blues” reflects the harmonic invention of Thelonious Monk if he were a stride blues pianist. Hiromi’s sense of improvisational lightheartedness is stacked in punchy grooves in turnarounds with deft scalar feints for good measure. She offers a wonderfully inventive take on ragtime in “Mr. C.C.,” an homage to the original king of comedy (and composer) Charlie Chaplin, with a crescendo worthy of his “City Lights.” At 22 minutes, “Rhapsody in Various Shades of Blue” is not only the longest cut here, it’s the most mind-blowing. Of course it uses George Gershwin’s iconic composition as the recurrent theme and jumping-off point for integrating jazz (including John Coltrane’s “Blue Train”), vintage American song, contemporary improvisation, blues, and pop – Hiromi grafts Gershwin onto the Who’s “Behind Blue Eyes” inside this labyrinthian suite, then returns to the source – with canny improvised embellishments along the way, illustrating not only several shades of the color blue, but a panoramic vision of these composers. This 74-minute recital portrays the nearly spiritual command Hiromi has of her instrument and its various languages to extend her astonishing technical facility. More than this, however, it underscores the visionary, authoritative place her pianism commands in modern jazz.