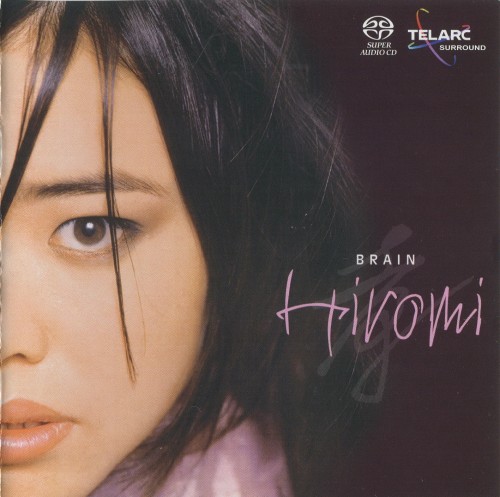 Hiromi Uehara (上原ひろみ), known as Hiromi, is a jazz composer and pianist born in Hamamatsu, Japan. She is known for her virtuosic technique, energetic live performances and blend of musical genres such as post-bop, progressive rock, classical and fusion in her compositions.

Japanese pianist and composer Hiromi Uehara dazzled the jazz world with her 2003 debut, Another Mind. Its mash of keyboard pyrotechnics and range of compositional styles was multiplied exponentially by her irrepressible energy. On that set she used variously sized ensembles to articulate her compositions. On Brain, Hiromi strips it back to a trio and offers a more intimate look at her wide musical universe, utilizing drummer Martin Valihora, bassist Tony Grey (both fellow Berklee College of Music alums), and alternately bassist Anthony Jackson. The album opens with the wacky “Kung-Fu World Champion” with its mélange of sequenced keyboards. It’s a fusion tune to be sure, but it’s so kooky and funky that it transcends the label despite its reliance on staggering time signatures and stop-on-air turnarounds and changes. It’s a careening tour de force where electronic keyboards and pianos are layered over a scattershot rhythm that pulls and pushes the deep pocket funk and strafes it with a post-bop sensibility. Grey’s bassing here is so choice, so utterly fluid and physical. But it’s back to jazz on “If…” with Jackson taking the bass chair. It’s a strolling soul-jazz figure, bubbling over a series of chromatically arranged ostinati. Its beauty is crystalline despite all the activity. “Wind Song” is a mid-tempo ballad with beautiful ringing lines in the middle register. Its repetitive figure shifts and shapes an alternate melodic line in the solo. The knottiness of the title track offers a close, scrutinizing view of Hiromi’s mad muse; using her piano to articulate a figure she creates a warped and angular counterpoint with electronic keyboards keeping the rhythm section striating in between, with precise interstitial motifs before the entire cut gives way to a blessed out of minor key prelude on the piano and her rhythm section dancing around the changes in hushed tones. The centerpiece of the set is a stunningly beautiful tune called “Green Tea Farm.” A solo piece, it is pastoral. In sum, Hiromi has built upon her previous effort by stripping down her band and showcasing the less physical but no less ambitious side of her improvisational and compositional flair. Her sound might still be confounding to the purists, but who cares? Hiromi is a jazz pianist for the new century, one whose “yes” to the wealth of musical styles that are available to her is only eclipsed by her ability to work them into a unique whole that bears her signature.