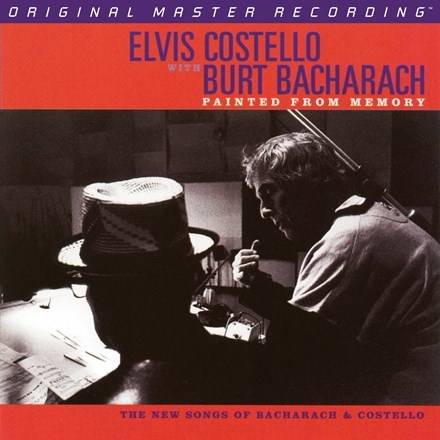 Painted from Memory is a collaboration between Elvis Costello and Burt Bacharach. The collaboration commenced with “God Give Me Strength”, a commission for the 1996 film “Grace of My Heart”. Apparently pleased with the result, the pair expanded the project to this full album, the first for Costello after an absence of two years, and for Bacharach after an absence of 21 years. Lyrics and music are co-credited to both Bacharach and Costello. “I Still Have That Other Girl” won a Grammy Award in 1998 for “Best Pop Collaboration with Vocals” for Bacharach and Costello.

Elvis Costello and Burt Bacharach first collaborated on “God Give Me Strength,” a sweeping ballad that functioned as the centerpiece in Allison Anders’ Grace of My Heart. It was a stunning song in the tradition of Bacharach’s classic ’60s work and it was successful enough that the composers decided to collaborate on a full album, Painted from Memory. Wisely, they chose to work within the stylistic parameters of Bacharach’s ’60s material, but Painted from Memory never sounds like a stylistic exercise. Instead, it’s a return to form for both artists. Bacharach hasn’t written such graceful, powerful melodies since his glory days, and Costello hasn’t crafted such a fully realized album since King of America. It’s a testament to both that even if the album is clearly in Bacharach’s territory, it feels like a genuine collaboration. Often, the music not only evokes the spirit of Dionne Warwick, it’s reminiscent of Elvis’ torching ballads for Trust. Costello keeps Bacharach from his schmaltzier tendencies, and Bacharach keeps Costello from overwriting. With its lush arrangements, sighing brass and strings, gentle pianos, and backing vocals, it’s clearly a classicist album, yet it sounds utterly timeless. Its melodies are immediate, its emotions subtle, its impact lasting – and, with that timeless sound, Painted from Memory illustrates that craft cannot only be its own reward, it can be genuinely moving.