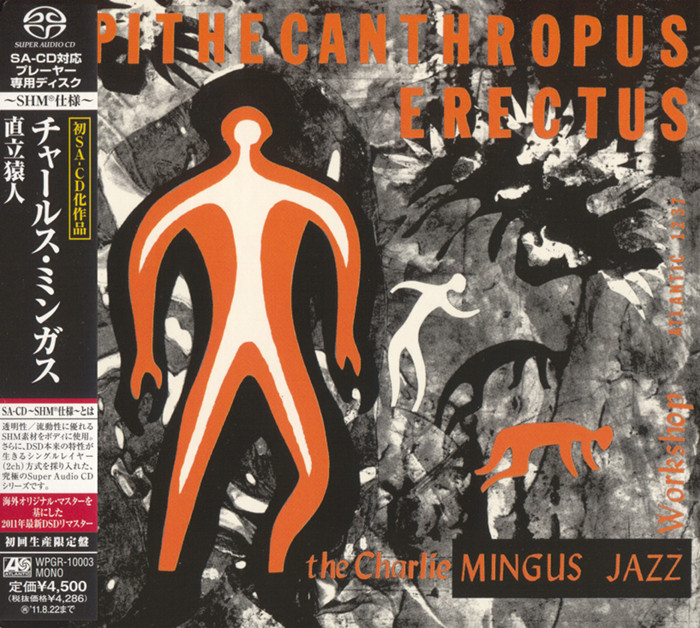 Pithecanthropus Erectus was Charles Mingus’ breakthrough as a leader, the album where he established himself as a composer of boundless imagination and a fresh new voice that, despite his ambitiously modern concepts, was firmly grounded in jazz tradition. Mingus truly discovered himself after mastering the vocabularies of bop and swing, and with Pithecanthropus Erectus he began seeking new ways to increase the evocative power of the art form and challenge his musicians (who here include altoist Jackie McLean and pianist Mal Waldron) to work outside of convention. The title cut is one of his greatest masterpieces: a four-movement tone poem depicting man’s evolution from pride and accomplishment to hubris and slavery and finally to ultimate destruction. The piece is held together by a haunting, repeated theme and broken up by frenetic, sound-effect-filled interludes that grow darker as man’s spirit sinks lower. It can be a little hard to follow the story line, but the whole thing seethes with a brooding intensity that comes from the soloist’s extraordinary focus on the mood, rather than simply flashing their chops. Mingus’ playful side surfaces on “A Foggy Day (In San Francisco),” which crams numerous sound effects (all from actual instruments) into a highly visual portrait, complete with honking cars, ringing trolleys, sirens, police whistles, change clinking on the sidewalk, and more. This was the first album where Mingus tailored his arrangements to the personalities of his musicians, teaching the pieces by ear instead of writing everything out. Perhaps that’s why Pithecanthropus Erectus resembles paintings in sound — full of sumptuous tone colors learned through Duke Ellington, but also rich in sonic details that only could have come from an adventurous modernist. And Mingus plays with the sort of raw passion that comes with the first flush of mastery. Still one of his greatest.