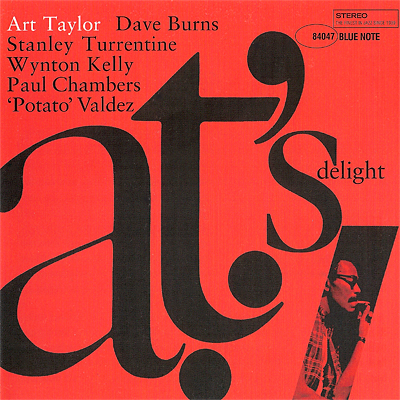 Although Art Taylor was one of the busiest modern second-generation jazz drummers, working in the studio with Coleman Hawkins, Donald Byrd, John Coltrane and many others, he only released five albums under his own name, of which A.T.’s Delight was the third. And a delight it is indeed, bright and percussive, and when conga player Carlos “Patato” Valdes joins Taylor and pianist Wynton Kelly and bassist Paul Chambers on three cuts (Thelonious Monk’s “Epistrophy,” “Move” and a Taylor calypso-inflected original called “Cookoo and Fungi”), the rhythm pocket opens into a deep blue sea for the horn men (Stanley Turrentine on tenor sax and Dave Burns on trumpet). “Move” does exactly that, it moves, and at a blistering pace. Monk’s “Epistrophy,” thanks in part to Valdes, reveals its rumba roots, and has never sounded brighter. The seldom-covered Coltrane composition “Syeeda’s Song Flute” seems likewise refreshed and revived. The lone Taylor original, the driving “Cookoo and Fungi,” is as sharp and alert is a kitten waking from a nap in the spring sun, and Taylor’s drum solo is crisp, efficient and slides seamlessly into the calypso-informed main theme. A.T.’s Delight is a solid outing, with a wonderfully nervous but completely focused energy.