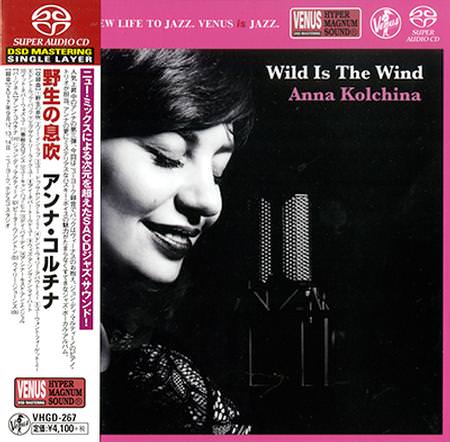 Anna Kolchina’s mellow seductive voice has been heard around the world. Born in the Russian Republic of Bashkortostan and a graduate of the St.Petersburg State University of Cultural Arts, Anna has since performed and recorded with world class musicians from Russia, Europe and USA. In 2015, Anna’s debut album Street of Dreams was recorded with the world famous Italian jazz pianist Massimo Farao’s trio in Turin, Italy. In 2016, Anna released her sophomore record with Venus Records, Dark Eyes. Wild Is The Wind is Anna’s third record with Venus, recorded in New York with an all star band featuring John Di Martino on piano, Peter Washington on bass and Willie Jones III on drums.

Anna Kolchina’s Wild is the Wind is a masterclass in ensemble performance. Backed by pianist John di Martino, bassist Peter Washington, and drummer Willie Jones, Kolchina is more an equal quartet member than a singer backed by a trio. This is experienced immediately on the title piece, where Kolchina’s delicately-played voice peeks out from behind Washington’s gentle bass playing as it directs the remainder of the arrangement. It is a stunningly organic musical effect that increases the intimacy of the performance greatly. This approach characterizes the remaining tunes, all “standards” to one degree or another. The engineering captures the music three-dimensionally, where the listener can almost walk among the musicians as they perform.

Another element to note about this recording is its programing. The album is made up of 14 love songs… all kinds of love songs. On one hand there is the tentative cynicism introducing “You Do Something To Me,” and maturing in “So In Love,” while a completely different love aspect is studied in the loss-lessening “Don’t Look Back,” “It Never Was You,” and “You Can Have Him.” In all the different settings, Kolchina uses her refined, yet street-smart voice to finely hone the song she is presenting. The totality of approach on Wild is the Wind makes it an event in itself. While Kolchina’s voice is less than perfect, it is perfect in that her vocals betray a knowing and aware character not afraid to show its wounds in its vulnerability, while telegraphing a warning to the listener that it has been all places and knows all things.