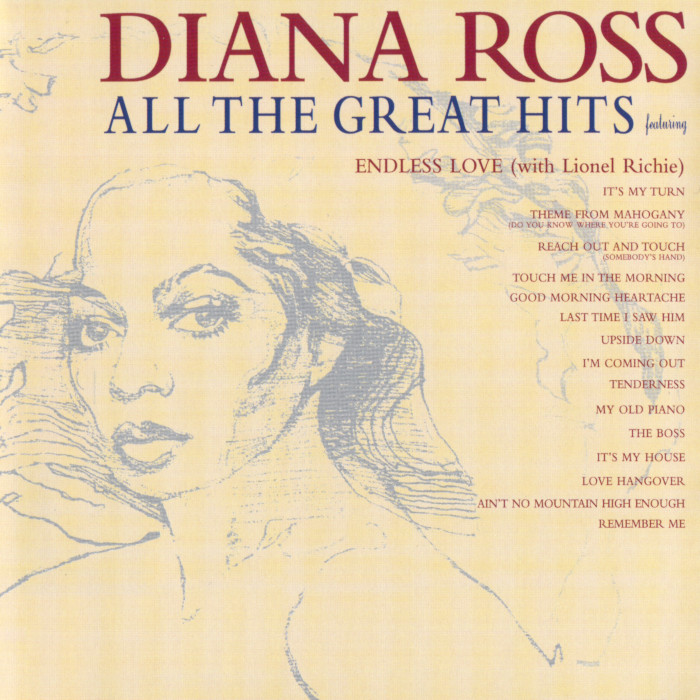 All The Great Hits is a compilation album by Diana Ross released in 1981, the second Motown compilation set to capitalize on the success of 1980’s diana produced by Chic. Her duet “Endless Love” with Lionel Richie was from a movie with Brooke Shields and, just like 1980’s “It’s My Turn”, had already been released as a single and on a soundtrack album. The double-album detailing Ross’ career at Motown was released in the weeks preceding her RCA debut Why Do Fools Fall in Love and became her third album that year to reach the top 40 in the U.S. The album was certified Gold in the USA and Platinum in the UK.

Diana Ross is certainly a diva of goddess-like proportions. Whether joined by the Supremes, or out on her own, her voice is unmistakable and powerful, plus she possesses the uncanny ability to take songs penned by others and make them very much her own – to imbibe them with her very soul. This collection of Ross’ best-known and loved hits is perfect testament to her massive gift. Working closely with both singer/songwriting duo Ashford & Simpson, as well as producers Nile Rodgers and Bernard Edwards (both of Chic), Ross brought six songs to the top of the pop charts over a decade – all included here. From the early classic gospel-inflected “Reach Out and Touch (Somebody’s Hand)” and the empowering chest beater “Ain’t No Mountain High Enough,” to the lite soul of “It’s My House,” Ross demonstrates full range. Also featured are the massive club hits “Upside Down” and “I’m Coming Out,” cut with Rodgers and Edwards. Strong and up-tempo, both songs became disco manifestos across the country in the early ’80s and helped to keep the genre alive just a little bit longer. And, of course, this compilation is completed, naturally, with both the sultry throb of “Love Hangover” and the Lionel Richie duet “Endless Love.” If there is a failing at all, it is within the “Medley (With the Supremes).” This glossy track hits the highlights, but really, why butcher such amazing songs? Any one would be better off slipping a Supremes greatest-hits onto the old turntable. But for the casual listener, this probably hits the spot. It’s heavy on the chart-toppers, and a sweet sonic masterpiece by anyone’s standards.