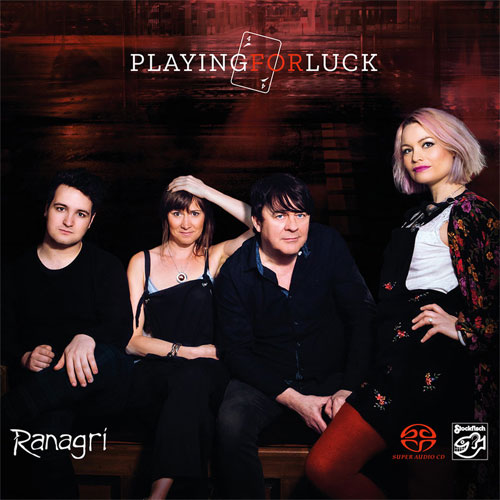 This is soulful music played by gifted artists who bring vision and virtuoso chops to their work. The contemporary-folk group Ranagri enchants while living up to the promise of the SACD stereo format, putting the listener virtually in the studio with a chilling level of intimacy. The players are conservatory-level musicians who augment the core instrumentation of six- and four-string acoustic guitars, piano, bass, and percussion with such exotic fare as bansuri, whistles, shakuhachi, harmonium, chlarsach, and memotron (a digitized mellotron). The lyrics are grounded in English balladry, and “The Medication Show” and “Falling Down” have a jaunty Celtic feel. But Ranagri’s chamber-folk displays a broad range of influences, including musical theater and jazz, as evidenced by Marshall’s flute solo on “Like My Enemy” and “The Thief”; her flute solo on “Out There” is spellbinding. Uplifting and joyous, these 12 songs are often buoyed by rich three- and four-part vocal harmonies. Playing for Luck is produced, recorded, and mixed by Günter Pauler, who has a real affinity for acoustic music—Stockfisch is a German label deeply committed to audiophile recordings. Pre-mastering duties were handled by Grammy-nominated bassist Hans-Jörg Maucksch of Pauler Acoustics.