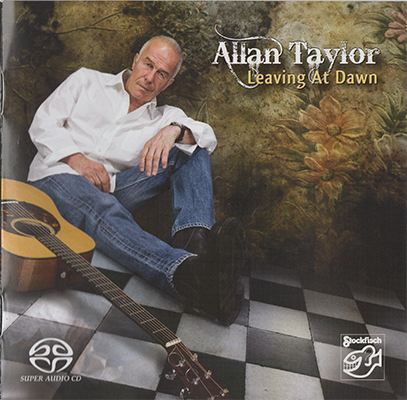 David Kidman, fRoots, August/September 2009:
The latest album from Allan, his 20th, is heralded as showing a return to the more folk-inflected style of troubadour song that characterised his earlier years. Whatever, Allan remains the consummate craftsman-in-song, and he hasn’t in any way abandoned the key themes and concerns that he’s developed and made very much his own over a long and illustrious career. Leaving at Dawn is absolutely quintessential Allan Taylor, instantly recognisable for its telling combination of a uniquely expressive, warm and inviting vocal delivery and an attractive, precisely captured instrumental backing, centred as ever around Allan’s own intricately moulded and mellifluous guitar playing. But it’s also the product of an artist of total maturity and integrity, delivering work of the highest self-imposed standards and exhibiting (in every single aspect of its presentation) supreme confidence without complacency.
This new batch of songs was written(with just one 1993 exception) between 2001 and 2007, each one a prime example of Allan’s second-nature ability to directly share his emotions in simple yet always profoundly literate language, thereby taking the listener on a journey that feels personal yet contains universal truths aplenty. Allan’s musings are affectionate and eloquent, yet often more complex than they appear, primarily because they’re shot through with the perceptiveness and realism that are the hallmarks of a true observer.
Leaving At Dawn is full of songs that follow the songwriter’s eternal preoccupation, reflection with regret, either musing sensitively on love (Lay Soft On Your Pillow, Back Home To You) or embodying a strong sense of genius-loci (Provence, New York In The Seventies), often memorably bringing together both strands in the same song. Especially beguiling here are two songs in traditional vein (Firefly, already celebrated in Tom McConville’s fabulous recording, and The Last Of The Privateers), The Almost Man (a chokingly pertinent tribute to Allan’s father), and Winter (a beautiful and masterfully poetic expression of tender reassurance), while Red On Green is Allan’s own translation of a poignant song of farewell composed by Massimo Bubola based on a WW1 love-letter written my Massimo’s uncle.
The disc’s exceptional, state-of-the-art recording draws you in right close, with Allan’s very special and intimate delivery cocooned by the immaculately judged and empathic contributions of a handful of other musicians (guitar, dobro, accordion, banjo, bowed psaltery, fretless bass). I feel sure that Leaving At Dawn will come to be judged as one of Allan’s finest ever collections.

Nigel Schofield, The Living Tradition:
Everything about this CD declares quality and consideration. Recorded with stunning digital clarity and released on SACD (don’t worry, it plays on your old CD player), it is packaged in a new design of durable jewel case and features a cover shot which is a little work of art in itself [‘delicate – looks like Vermeer”].
This collection of a dozen new songs is contemplative and elegantly crafted. While many of the songs here are reflective – a meditation brought on by the passing of his father, a translation of a lost soldier’s letter home, New York In The Seventies which does what it says on tin, several songs of discreet departure -, the overall mood is of optimism and possibility: “Let’s get on the road and follow that golden star” is the ultimate response to the arrival of the urn containing his father’s ashes.
What slips by almost unnoticed on first hearing is the narrative power of most of the songs here: they certainly evoke a time; they clearly depict specific situations; but they also subtly tell a story – one reaches the end of a song, having, as it were, enjoyed the view, wondering how you got to where you now are. By the time you’ve figured what’s happening, you’re hit with The Last Of the Privateers – a full-on narrative ballad.
Allan Taylor has always had that felicitous skill of making you want to listen to his latest album – rather than it simply prompting a return to earlier work. Here, it is not just the quality of the writing and singing which draws you back to the CD, but also the spacious, acoustic settings: they are rooted in folk music and are richly textured – among the instruments one hears accordion, banjo, fiddle, cor anglais, bowed psaltery, fiddle, viola, a looping fretless bass and, of course, magnificent rolling acoustic guitars. It is, in short, an acoustic treat.
Speaking of the album’s folk influence, one must quote Allan’s note on the tradition-based Firefly: “Many of the finest songs I know are from the tradition and the British Isles and Ireland are graced with some of the most beautiful and powerful songs in the English language.” Some of the finest songs you’ll hear this year on this CD. To steal a line from The Almost Man, “he’ll smile and say, ‘You did it, Al’ ”.