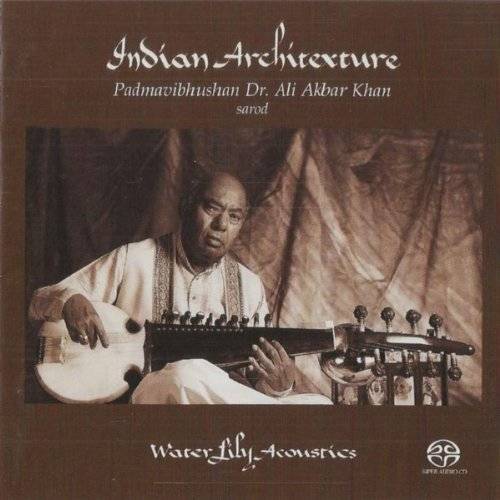 The doyen of Hindustani music, and one of the world’s greatest musicians, creates four spellbinding rags that are destined to become part of the world’s musical heritage. The son of influential Hindustani musician Allaudin Khan, Ali Akbar Khan was one of the Eastern world’s greatest musicians. A master of the sarod, a 25-stringed, lute-like, Indian instrument, Khan brought the Northern Indian classical music to the international stage. A five-time Grammy nominee, Khan was called, by Yehudi Menuhin, “an absolute genius, the greatest musician in the world”.

Ali Akbar Kahn is a master of Indian classical music. His main mojo making machine is the sarod which you can see pictured in the album cover’s art. Indian Architexture is a stunning recording of Ali Akbar Khan playing his sarod with tabla accompaniment by Swapan Chaudhuri. Together they present four ragas each nearly a half hour in duration. Originally released and recorded by Waterlily Acoustics, you can think of Indian Architexture as a spiritual journey in sound, a meditation, spritely ambient drone, minimalist music maximized, background music for practical flights of fancy, foreground music for awakening, or simply L’invitation au voyage.
If you take the time to listen to one or two or four of these ragas uninterrupted, imagine that!, I guarantee you will be breathing easier at their conclusion. I don’t really have much more to say except to say I find this music to be beautiful and capable of dissolving the thinking machine that rarely seems to rest otherwise.

“With this recording, the prize for the listener is to be taken through every emotion, Khansahib knows the terrain, let him drive.” —- Ry Cooder.